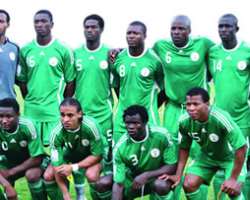 NFF moves Eagles vs Niger duel to Kano
By GBOLAHAN DADA
Tuesday, March 16, 2010
Nigeria Football Federation (NFF) has moved the second leg of the African Nations Championship second leg qualifier between Super Eagles' Team B and the Niger Republic to Kano. Nigeria's home-based Eagles crashed to a 0-2 defeat against Niger on Saturday in Niamey.

Both goals were scored in the first half and the result puts the Eagles chances of qualifying for CAF's second tier competition in grave danger. NFF also lost one of its board members, Alhaji Alli Galadima in the process to car crash.

But NFF Secretary-General, Dr Bolaji Rafiu Ojo-Oba, still believes Nigeria could upstage the visitors in the return leg. He said he had no doubt about the capabilities of the team as they have been working round the clock to ensure total victory in Kano.

Ojo-Oba said the Federation had almost concluded arrangements to see that the team play the match in Kano with the support of the state government. 'We are still in touch with Kano and there have been positive signals that the match would be staged in the Northern part of the country. We are hopeful that everything is under control,' he said.

Daniel Amokachi's team will now need to score three times without reply in the return leg in two weeks in Abuja. The game was played under tragic circumstances. A total of 16 teams will contest the second ever championships, double the number that took part in the inaugural event. Nigeria, led by Okey Emordi failed to qualify.

Meanwhile,Thank God Ike has said the home-based Super Eagles squad feel gutted after losing 2-0 to Niger and are determined to do everything to qualify.

Goalkeeping errors from Segun Oluwaniyi handed the hosts two goals in the first half, and a plethora of misses by the forwards consigned the Nigerians to a defeat that has stunned and angered fans back home. Ike says the players are well aware of the implications of failing to qualify.

'We are all disappointed,' the defender said: 'Nigerians put so much trust in us and we did not deliver. It will be a shame for us if we fail to qualify, but we are determined to make sure we don't miss out.' Ike said the team played well enough to win.

'They did not even create chances. We just gave away two goals, but we are not blaming anybody. 'We created so many chances and had about 10 shots on goal and five that went wide. We were just unlucky not to score.

'We won't make the same mistake in the second leg.' That game comes up in Kano in two weeks time.