I Cannot Be Bought By Anybody, Not Even Akpabio's Government-Uko Umoh 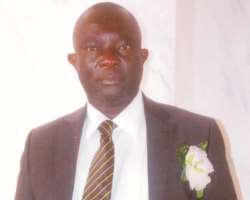 How did the story of league of publishers start?

There was need for us to come together as publishers to chart the way forward for an informed citizenry. The Pioneer Chairman was Ephraim Akpan, current chairman of Mkpat Enin Local Govt and I was his Deputy then and after being elected as chairman of Mkpat Enin, l was unanimously given a vote of confidence by all the registered publishers to be the new chairman. The league is being guided by a constituted Board of Trustees (BOT) and very soon I will constitute the new executive that will run the affairs of the League. We are doing just fine and projecting positives in our endeavours.

You are one of those very controversial publishers in Akwa Ibom, let me make reference to being supported by heavy weight politicians and government what's your take?

I enjoy what I do that is facilitating an informed Akwa Ibom people through publishing community pulse newspapers and will continue to support ideas that project good governance and democracy. I believe our people need to be rightly informed and not misinformed. For support by people and this government, this is one endeavour you enjoy goodwill if you are doing the right thing, l think that's the way it is.

Recently, the league of publishers which you are the chair gave an award to His Excellency Governor Akpabio as the best governor since the creation of Akwa lbom, what informed the decision?

Governor Godswill Akpabio has done tremendously well with the leadership of the state. You can't question the uncommon infrastructure renaissance in the state and his ability to empower Akwa Ibom people, it is what leadership is all about. So we decided after careful evaluation to reward him for all he has done and more that he intends to do for our people. As publishers of what society hear and know about governance, it was a step well thought of in the history of the creation of Akwa Ibom without any fear or favour, Gov. Akpabio has surprised Akwa Ibom people with quality leadership and we are happy to identify with the uncommon transformer and our working governor.

During the award to Governor Akpabio it has been alleged that government paid in millions, how true?

Given my integrity, I cannot subject myself to be bought by anybody not even this government. What we did as league of publishers was to reward Governor Akpabio for the visible transformation of the state which all of us, Akwa Ibomites can attest to. If anybody has evidence of my being paid in millions before or after the award can so speak or else accept our clean assessment of the quality leadership in the state. People who carry this kind of rumour are being sponsored by disgruntled elements who refuse to see any good in all that Governor Akpabio has done for our people.

Politically, where do you think power shift should go to as this is one issue Akwa Ibom people cannot shy away from?

My brother I'm not a politician. It will only be proper to allow politicians to detect the direction but have the general interest of Akwa Ibom people at heart. I only facilitate our people being properly informed.

Talking about how informed our people are, you have nearly ninety print media published in Akwa Ibom alone, how do you see this and democracy?

Yes it is a positive development. In fact if you go to saner climes you find more. It is a situation where positive minds X-ray society and report what they see. But what I'm against is reporting falsehood. Journalists should investigate stories before going to press. The league of publishers only recognize and identify with newspapers that are registered with the league.

How will you assess the performance of the commissioners in Akwa Ibom State?

I'm impressed by the performance of some of the commissioners particularly Mr. Bassey Albert, Commissioner of Finance for driving the economy of the state effectively through sound management of the state resources. Mr. Don Etim, Commissioner of Works who has ensured massive infrastructure across the state by implementing the transformation plan in that sector deserve mention not forgetting, Mr. Aniekan Umanah the Commissioner for Information for enhancing the image of the Akpabio's Government. I will not fail to mention Mr. Monday Uko, Commissioner for Youth and Sports for harnessing the potentials in our youth and Barr. Enoidem, who has also done well as Commissioner for Special Duties who moved from Ministry of Housing Renewal to his present position. The commissioner for environment, Mr. Enobong Uwah as ensured a clean Uyo and Environments. Other commissioners are also performing. Even some special advisers deserve mention for their excellent contribution to the uncommon transformation, like Engr. Etido Inyang, Special Adviser to the Governor on Technical Matters. I encourage and identify with go-getters like these commissioners and special adviser I have mentioned.

Are they challenges you encounter as a newspaper publisher?

Surprising, government and individuals always want the newspapers to write good reports about them but ethics of journalism are there to follow and particularly my paper community pulse insist on presenting an alternative medium of expression for the public and the government to air those views which are founded on truth, fairness, and are developmental. we make the public accountable to the government and vice versa. We write what we see and help correct the system and not government or politicians detecting the pace. I receive threats and insults but I insist on doing what the job demands of us.

How will you assess the current tour of the governor to federal constituencies in Akwa Ibom state?

2015 cannot be distanced from the governor's visit to constituencies. Certainly politics is not out of it but then it is still good for the government and the governed to interface from time to time since democracy is about the people. You can see new projects being commissioned by the governor as he is visiting different parts of the state.

Still on issues around Akwa Ibom, as a publisher do you think we need to do more to project the unity of Akwa Ibom people?

I love to see a united people. I promote unity in all I do especially among our people. You can feel it with the robust relationship me and you have enjoyed so far no matter which local government we come from, that is how it should be. I think our religious and traditional institutions should continue to project this. We need to encourage inter local government marriages. As a publisher, we use our platform not only to inform our people but to spread the gospel of love. Already our performing Governor is displaying this unity even in interactions with him by our people and in the policy actions of this government.

One issue that has really distracted President Jonathan's government is insecurity, can the north ever be peaceful again?

It is a very unfortunate situation that all that is happening in the northern part of Nigeria but as a patriotic citizen that is unacceptable. The Boko Haram insurgency has really been a torn in the flesh of President Jonathan's government and he has vigorously fought the menace. I also believe these insurgents are humans and with the will by the people to expose these people who are around them an end can come. Again I believe it is a political tool by disgruntled politicians to give a minus to Jonathan's government but sure God is all knowing and knows it all.

As Nigerians prepare for another round of elections in 2015, are there things to worry about?

Elections will come and go. What is important is for the people to decide that they will do the right things, vote credible leaders that will effectively represent them, we should not sell our conscience but be involved in the political process to make a difference and that is democracy. Young person's should refuse to be used by politicians for violence during elections as such politicians will abandon them should they succeed.

The national conference is here, is it a development Nigerians have been waiting for?

Yes, it is good for people to dialogue from time to time even at the family level, talk less of a multi ethnic society like Nigeria. Obviously there may be issues an ethnic group or the other may be unsatisfied about and here is an opportunity to vent that for the good of Nigeria and at the end of it all these plural views will be collated to enhance Nigeria's togetherness. It is good for us to have the discourse as a people and even more conferences. This is democracy and it is in order.

Nigerians are debating whether President Jonathan should contest or not. What's your take?

President Jonathan has every right to contest the next election. Politically, Nigerians owe him four more years to go in office. On the basis of two term stay logic he should run. Forget insinuations by dissatisfied politicians who are saying he promised to run for only one term and then quit. Nigerians are yet to be shown a document to prove their claim. I think they should stop playing the dirty tricks on the president and allow him have what is dutifully his right to run. It is left for Nigerians to let him stay o otherwise at the polls and not for some politicians to amplify their views to confuse Nigerians.

As we prepare to round off this interview, what advice will you like to give to Akwa Ibom people?

Akwa Ibom people are hospitable people and very enterprising. We need to love ourselves the more and be properly informed of actions of government so as not to deceived by those who want to distract good governance of the Governor, Godswill Akpabio. We need to support this government to achieve more.