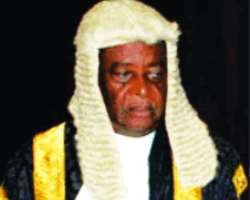 The admitted mastermind of the 9/11 terror attacks has issued a rambling defense of Osama bin Laden's son-in-law, on trial in New York for allegedly being al Qaeda's propagandist in the wake of the attacks.

In a rare statement made public, Khalid Sheikh Mohammed said Sulaiman abu Ghaith -- an Islamic preacher whom the United States has charged with conspiracy to kill U.

S.
nationals and providing material support to terrorists -- is falsely accused of being involved in al Qaeda's military activities.

Mohammed said abu Ahaith was more of a visiting celebrity who preached the Quran to al Qaeda recruits.

Mohammed's 14-page statement was in response to questions from abu Ghaith's attorney and was filed in U.

S.
District Court in Manhattan on Sunday night.
Abu Ghaith was captured last year after years of being among a group of alleged al Qaeda operatives sheltered in Iran.

He was arrested in Turkey and deported to Kuwait via Jordan, which helped U.

S.
agents capture him.
The New York trial, blocks from the site of the former World Trade Center destroyed in the 9/11 attacks, has already featured testimony about previous al Qaeda operations, including the 2001 shoe bomb attempt, which U.

S.
authorities say abu Ghaith knew about beforehand.
Mohammed, the most senior al Qaeda leader in U.
S.
custody, used the statement to lecture the United States about its errors in supporting jihadists in their fight during the 1980s against the Soviet Union's forces in Afghanistan, realizing too late the level of training ongoing in mujahedeen camps.

"Uncle Sam destroyed his own country by his own hand with his stupid foreign policy," Mohammed said in his statement.

Mohammed has taken full or partial credit for planning multiple operations beyond 9/11, from the 1998 U.

Abu Ghaith, Mohammed said, was a "pious man" and among many scholars drawn to Afghanistan when the Taliban took control of the country in the mid-1990s.

He describes Afghanistan during those years as something of a paradise, with strict Islamic laws making the country safe from crime.

He said he doesn't recall meeting abu Ghaith and that, as a scholar and preacher, abu Ghaith wouldn't have known about military operations, in part because al Qaeda was careful to restrict access to such information.

"He did not play any military role and to the best of my knowledge he did not receive any military training at any of the training camps for the mujahedeen in Afghanistan," Mohammed said.

"I personally never spoke with Sheikh Sulaiman abu Ghaith about the shoe bomb operation," he said, adding that U.

"Those tasked with giving statements to the media do not necessarily know all the details of an operation and are sometimes even unaware of the very existence of the operation.

" Mohammed also tried to undermine U.
S.
allegations that abu Ghaith took an oath of allegiance, or swore "bayat," to bin Laden.

He said that swearing such an oath doesn't mean a person is to carry out an operation.

"To tell the truth, I do not even know if (abu Ghaith) personally swore bayat to (bin Laden) or not," he said.

Abu Ghaith's attorney said in his court filing that Mohammed's statement is a piece of important exculpatory evidence.

He had requested Mohammed to testify via video, but U.

S.
restrictions and Mohammed's own refusal to personally testify prompted the written questions and response.