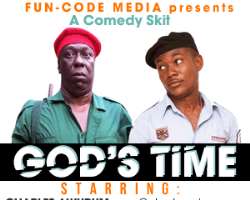 Reliably known for the production of most quality skits on the television channels and online sites, Fun-Code Media produced this eight minutes comedy skit in Enugu; it also starred Elvis Ogbonna.

Interestingly, the skit tells the story of a frustrated stricken man (Awurum) who came to steal God's wall clock in other to set it to his time for breakthrough and turnaround, but at the end got apprehended by the Church's watchman (Mayor).

However, Fun-Code Media is under serious pressure for more after it released one of the most jaw-dropping skits on Val's day, which featured Nollywood actor of the rave, Ken Erics and Media Personality, Ugochukwu Favour-Mayor in Peep, and now, God's Time.