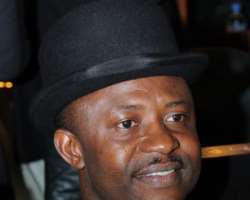 
The new Sports Minister, Tamuno Danagogo, says the Super Eagles' 0-0 draw with their Mexican counterparts in an international friendly is a good omen for their 2014 World Cup appearance.


Danagogo told newsmen in Abuja on Thursday that the Super Eagles were getting to understand themselves and would improve with time.


'Mexico is also a good team and for us to hold them to a 0-0 draw, it tells Nigerians that our team is working hard to ensure that we make a substantial impact and go far at the World Cup.


'So, it (the draw) is a good omen, because it was evident in the match that they are gradually improving and understanding themselves.


'I believe that they will continue to improve as they go on. So, it is a good sign for us,'' he said.


The match, which was to prepare both teams for the football mundial, was played at the Georgia Dome Stadium, Atlanta, Georgia.


The Eagles have been drawn in Group F with Argentina, Bosnia-Herzegovina and Iran at the World Cup, scheduled to hold from June 12 to July 13.(NAN)