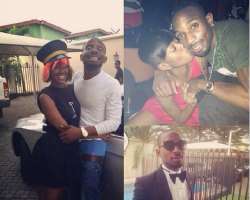 Gifted artist and younger sibling to D'Banj, Kayswitch, has confirmed rumours making the rounds that he and girlfriend, Meena Subramani, are expecting a baby.

The Liberian 'beauty queen' and Kayswitch have been dating for more than a year with the love between them waxing stronger.

Speaking on the issue, he had this to say: “Yes, it is true. My girlfriend is pregnant. It really makes me feel like a man.”

However, he was not definite about the time both of them will storm the aisle to tie up the nuptial knot. “Definitely, we will get married one day, though I cannot disclose when now. By the time we are ready, you will get to know about it,” he said.