Needed: A team of achievers – Guardian 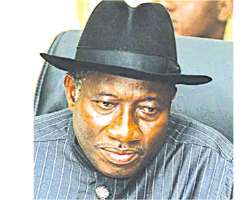 
There is no doubt  that Goodluck Jonathan's Presidency has been acutely undermined by a coterie of lowly rated personnel that constitutes its kitchen and open cabinet, a reason why it is deemed to be underperforming. This phenomenon must change if the administration would ever be able to deliver on its promises. For whether a president would succeed or not is a function of the type of cabinet  or aides he has assembled.  The concern of most Nigerians is that President Jonathan has not been too painstaking in his choice of aides and that the citizens' yearning to have the right calibre of people in charge of affairs remains unrealised. Although appointments are made from time to time by the Federal Government to sensitive positions,  the perception is that mediocrity remains dominant.

Yet Nigerians are blessed with a vast array of highly competent persons who are globally acknowledged as distinguished professionals, persons of honour and integrity. There is, therefore, no reason the country cannot be governed with the best hands except for the wrong approach or disposition of the appointer.

As Jonathan's government is winding down with its eyes on the possibility of a renewed mandate, it must raise the stakes. The President in particular must confront all the obstacles that make it impossible for him to appoint the right and best persons into offices. He must demonstrate a capacity and the will to rise to the occasion and weather the storm. This is a convenient point at which to take a break from the errors of the past by making the best of the on-going cabinet reshuffle.

In other words, in assigning portfolios to the newly screened ministers, in replacing ministers and aides who have been dropped and others who may soon be dropped, the President should put in those who understand the system and who have what it takes to make the system work so that at the end of the day, he would have surrounded himself with the best in the land. He should keep at arm's length parvenus, court-jesters and opportunists who are likely to see their appointments as an invitation to 'come and eat' instead of being an opportunity to serve. What the country deserves at this critical time are statesmen and women of good conscience who are not perverted by the spoils of office but are persuaded by conviction as opposed to convenience.

Those are the ones who would look the President in the face and tell him the bitter truth where his desires and policies are inimical to the health of the nation. They are those who merely by looking at the President's face know what his pains are and what to do to ease the pain in the interest of the nation. Those attributes come with experience, discipline, patriotism, altruism and competence. Very few of those who desire public offices or have been appointed into same are imbued with them. Greed, self-centeredness, myopism, ungodliness, crude incompetence, dishonesty and consummate eyes for the benefits which the office can offer, all amounting to self aggrandizement are what many have in abundance. What they are capable of contributing to the growth of the nation, nay the enrichment of its people counts for nothing. Regrettably, these are the ones who often catch the fancy of the powers that be.

The political consideration that determines persons' appointment to offices may be favourable to the President but in the long run it is the nation that suffers for it. This is not without collateral damage to the President himself or his name in the final analysis. When he makes the wrong choices, he ends up having to fire such appointees once again in the future. That does not allow for consistency and sustainability of policy, a minus for government and its programme.

As the Chief Executive Officer of the federation, the president has the right to hire and fire his appointees at will. This right is constitutionally guaranteed and consistent with common sense. It is just that Nigerians bear the brunt of such poor choices any time he hires the wrong set of people. That is why his right to hire must be exercised with circumspection and great introspection. He owes Nigerians good governance as a matter of obligation and social contract. So, his right to hire is curtailed by the right of Nigerians to be governed well, responsibly and productively. Because in the ultimate, the people pay the remunerations of the President and his appointees and they are the ones who must be satisfied with the performance of all.

Just as important, it is one thing to appoint the right set of persons into offices, it is another thing to do so as at when due. Doing the right thing at the wrong time may emasculate the potency of the effort or the desired consequence, particularly where time is of the essence. Nigerians find it difficult to understand why their president allows sensitive offices to remain unmanned for a long period of time when vacancies occur.

Prudence demands that before an incumbent is fired, his replacement must have been identified and announced almost immediately to stave off pressure from irresistible quarters. Presidential dilatoriness invites unholy pressure which crystallizes into wrong choices or appointments as has been seen time and time again in the life of this Administration. Every leader must take personnel and the management thereof very seriously. Dr. Jonathan owes himself the duty of not being an exception. So far, he has been.