Emeka Smith- I recycle my jokes 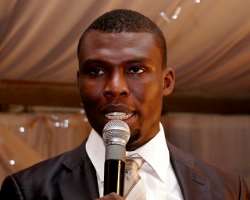 Emeka Smith, a popular comedian who says he is a very serious person at home has been here with us for a long time. Cracking our ribs but claims his wife wants to laugh, she goes to YouTube and admits a simple truth that he recycles his jokes because every comedian does that.
How did he join the laughter industry? “I just stumbled on it because I never set out to be a comedian. I had always wanted to be an actor. I started as an actor in church. I had a drama group called 'The Isaacs'. Whenever they called the group to perform, I would go up the stage and do little jokes while waiting for the group to get ready. I would tell a few jokes, and people would laugh more than they would enjoy the drama. So, they encouraged me to go into stand-up comedy. I gave it a trial. I was introduced to the AY Open Mic Show and I won.”

Emeka admits he recycle jokes “Yes I do. I recycle my jokes. Every comedian does. A joke told in Nigeria must be recycled if it has to be told abroad, to suit the people there.”

How he met his wife, “Yes, I met my wife at a comedy show, AY Live, four years ago. I worked at the show and after the show, her friend approached me to take a picture of us together. I gave her my card and asked her to keep in touch. She just visited from Dublin. After about a month, she sent me a message on Facebook. The communication grew stronger, and we discovered we have a lot in common. We dated for about a year and six months before we got married.”