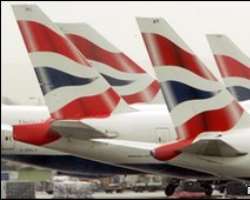 The Unite union has announced two sets of strikes

He told the BBC's Andrew Marr Show that the strike posed a threat “to the future of one of our great companies in this country”.

The dispute is over reduced staffing levels and pay at the airline.

Members of the Unite union are due to strike for three days from 20 March and four days from 27 March.

'Deplore'
“Let's be absolutely clear the stakes are incredibly high in this strike and I absolutely deplore the strike,” said Lord Adonis.

“It is not only the damage it's going to do to passengers and the inconvenience it's going to cause – which is quite disproportionate to the issues at stake – but also the threat it poses to the future of one of our great companies in this country.

“It's totally unjustified, this strike, on the merits of the issues at stake and I do call on the union to engage constructively with the company.”

It said the cabin crew changes it imposed last November were vital cost-cutting measures to secure the airline's future and return it to profitability.

A BA spokesperson said although the company was facing two years of record financial losses, “unlike other businesses, we have avoided compulsory redundancies”.

“Cabin crew face no pay cut or reduction in terms and conditions – and remain the best rewarded in the UK airline industry.”

Donations claim
Lord Adonis's comments were in contrast to the more conciliatory words used by Alistair Darling on Sunday.

“I am very, very clear that the two sides must get down and try and sort this out without inconveniencing the public or having any adverse impact on the economy,” the chancellor told Sky News.

“I'm very clear that strikes, particularly a strike like this, particularly just before the Easter break, is extremely damaging for the travelling public, of course it's damaging to the airline and I think people need to think long and hard about the consequences of what they do.”

Shadow transport secretary Ken Clarke on Friday accused the government of not condemning the planned strike because Unite was one of its major donors.

“There is no point in being naive,” he said. “The fact is that Unite has given £11m to Labour funds over the past four years.”

'Bent on confrontation'
Unite has confirmed it will not strike over Easter, but warned there could be further action after 14 April if a resolution with BA is not agreed.

BA boss Willie Walsh said on Friday that the two parties were “not close at all” to coming to an agreement.

The Unite union and its members say the changes are disproportionate.

They also say they hit passenger services, as well as the earnings and career prospects of cabin crew.

Unite says it acknowledges the “need for change”, and has proposed its own cost-cutting package, which it says is worth £63m. BA has rejected this, disputing this figure.