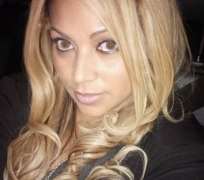 Lola Omotayo-Okoye, wife of Peter Okoye of P-Square fame, has decided to go blonde. The blonde hairstyle has been recently rocked by some female celebrities in Nigeria in a bid to look like their 'white' counterparts.

Lola looks 'smoking hot' in her new hairstyle. She is known for her dark hair, but decided to change her look.

In November 2013, Lola and Peter held their traditional marriage in Lagos after having two children together. She is one of the prettiest wives of Nigerian male celebrities.