The last time I was robbed 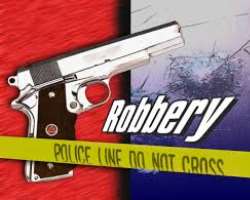 
The last time I was robbed was on the 3rd of January 2014 in Onitsha, Anambra State. It was getting to the end of my holiday in Nigeria and that day I had attended a traditional wedding ceremony at Oraifite with my mother. As we entered Onitsha around 6.00 p.m., the chauffer pleaded with my mother to take over the wheel as he needed to be on his way home to his family. Mum agreed. He parked in front of a small market and got off the vehicle. I alighted from the back and occupied the front passenger seat. It took my mother a short while to gather herself together. As soon as she got down from the back seat, a commercial motorcycle whose two occupants wore fez caps blocked her from entering the driver's seat.

'Madam, give us what you have.' The rough voice riding the motorcycle said.

I immediately knew they were robbers. Poor Mother – with a DNA ingrained with an unshakable belief in the goodness of every human being she comes across in life – did not realize so.

'My brothers,' she called on them, smiling. 'Oraifite ka anyi si. We are just coming from a traditional wedding.  We don't have anything for you today o!' She was smiling and trying to close the door of the back seat. One of the robbers held on to the door, perhaps as a shield from onlookers and passersby.

Either Mum was still thinking inside the bubble that is her perfect world, or she was in a state of shock, for she remembered the carton of Malt we had purchased earlier.

'Chy,' she called out to me. 'Bring some cans of Malt for our brothers here to share with us.' Her voice retained the sing-song tone that had marked our conversation about the event we attended.

I did not bring any Malt cans. My eyes caught the butt of a gun and my fingers, without receiving any impulse from my brains, frisked through my bag to retrieve all the Naira notes inside. I extended shaky hands to my mum who had not noticed the gun.

'Ehn!  You are lucky today, my daughter has found you something,' she spoke in the direction of the robbers as she carefully selected a single one thousand Naira note from what I had in my hand, while giving me an astonished look at to why I would want to part with all the notes I brought out.

'Mummy!' I said in a voice slightly raised in fear and panic. 'Give it to them, give them everything.' I pushed all the money inside her palms.  The tone of my voice, the now serious look on the faces of the robbers and the moves they were making under their shirts made her turn over all the money to them. They drove away immediately.

The fear mixed with relief, which flushed a relative's face as I related the incident brought tears to my eyes. 'The chauffer should have brought you back and taken a motorbike home. This state is like a war zone.' He stated emphatically. He went ahead to list people he knew personally in Anambra state who had been kidnapped for ransom, killed, maimed or in the least,  robbed multiple times, himself inclusive. I was speechless.  It is not fair. No human being should be made to experience such fear just for being resident in a place.  The last on the list was a close neighbor and friend to his family who was kidnapped as she stopped to buy roast maize after work, at about 6 p.m. 'You are extremely lucky it ended the way it did. In fact, it's a miracle.' He repeated over and over. 'This is one of the worst places to live on earth,' he concluded.

How possible?  I pondered.
As I began to talk to more people in Onitsha and Anambra state, the truth in my relative's statement began to emerge. As far as security is concerned, Anambra state, specifically Onitsha and environs is not fit for human habitation. From my observation and interactions,  while opinions appear to be divided on the success or otherwise of Peter Obi's tenure, there is unanimity and absolute convergence on his inability to ensure the security of lives and property within the state.

Most states and major cities have either banned and/or curtailed the use of commercial motorcycles within the metropolis, why not Anambra state? Commercial motorcycles have been established to be the transport of choice for armed robbers, assassins and for kidnappers in trailing their victims before abduction. When I made inquiries, I was informed that in Anambra state, the importers of motorcycles and motorcycle spare parts have been at the forefront of the lobby against banning that means of transport. I could not establish the authenticity of this assertion. But if at all there is any truth in it, then I ask, should the blood of the many innocent citizens killed by robbers on commercial motorcycle be sacrificed on the altar of profit for importers of motorcycles and its spare parts? Should the fact that Anambra state is fast losing its status as a frontline commercial state be deemed of less importance than the need for a few importers to remain in business? The answer is self-evident.

I write with a heavy heart and a heavier mind. I wish there was a way hardworking and honest Anambra state citizens and residents could be evacuated to a safe location with minimum disruption to their existence.  In that case, there would never be any need for this essay to be written. But as long as there are human beings  in Anambra state who have no other alternative but to live and survive there, fellow mortals whose existence is marked by utter helplessness and fearful anxiety, then this essay is only an obligation that posterity would demand of those alive today.

This is calling on Mr. Obiano to please immediately start to address the security challenges facing Onitsha and Anambra state. Citizens have to be alive and feel secured in order to benefit from, and contribute meaningfully to whatever infrastructural or other development plans he has scheduled.