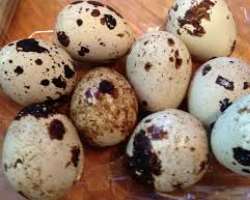 
A father of two from Komarock, Nairobi County has died evening after he took raw quail eggs to boost his performance in bed.

The 31 year old man was advised by a friend to take 30 eggs at once.

According to the wife, the deceased had of late shown a lot of interest in quails. He kept reading about the birds, benefits of its eggs among many other things. He even explained to her that the birds' eggs prevented aging.

While speaking to the media, the widow said that on Saturday, the husband left to work and came back with 30 quail eggs. He told her that he wanted to incubate the eggs so that they hatch because quails business was the in-thing.

At night, the deceased started complaining of stomach pain and was rushed to hospital but unfortunately was declared dead on arrival.

On checking in the kitchen, the mother of two discovered that all the 30 eggs bad been consumed and concluded that the husband had taken them.

The area administrator confirmed the incident saying that investigations are underway to establish if the man died from eating the eggs or from some other causes.

The body is lying at City mortuary