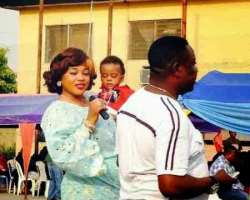 God has been so good to Nollywood top actor, John Okafor known as Mr Ibu despite all odds he blessed him with another son after the ordeal he faced with his ex-wife, he accused his ex-wife of killing their son and wanting him dead .He also accused her of kidnapping his 2nd wife and his 2 year old son who died 10 days after he paid an undisclosed ransom for their release.

Yesterday the actor held the child dedication of his 3rd child with his 2nd wife Stella maris, the couple was joined with His friends,family and colleagues were there..
If you recall he.

He and his wife have been blessed with another son