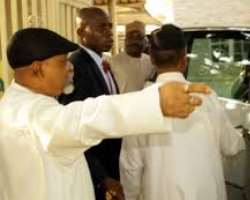 The former Federal Capital Territory (FCT), Mallam Nasir, on Monday morning presented himself to the state Security Service (SSS) three days after evading arrest. He was accompanied by the Rivers Governor Rotimi Amaechi. El-Rufai had earlier insisted he would not honour the invitation of the State Security Service except another venue other than the service headquarters was arranged. The operatives of the service on Friday invaded the former ministrr’s residences in Abuja, ransacked his homes and carted away vital documents in an attempt to forcefully arrest him Amaechi claimed that the APC had mandated him to follow the former minister to the SSS office. They arrived at about 9:20 a.m today. They are still at the office of the SSS at the time of filling this report.