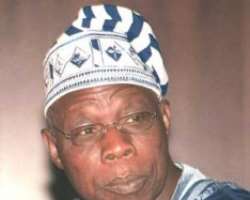 
The new National Chairman of the Peoples Democratic Party, PDP, Adamu Mu' azu was, yesterday, locked in a two-hour secret meeting with former President Olusegun Obasanjo, at the latter's Hilltop Mansion, in Abeokuta.

Mu'azu, arrived Abeokuta around 3: 30p.m. in a convoy of four vehicles and headed straight for the meeting without speaking to newsmen. He also did not speak to waiting reporters when he left the residence at exactly 5: 35p.m.

The closed door meeting, had in attendance, Senator Andy Uba, who was a senior aide to Obasanjo during his administration, former PDP National Auditor, Bode Mustapha, among other associates of Obasnjo and Mu'azu. Mu'azu's visit, it was learnt, was not unconnected with the crisis rocking the party upon which Obasanjo last year decided to suspend himself from activities of the party at all levels.

Mu'azu was appointed last week by the National Executive Committee of the party following the resignation of the former Chairman Bamanga Tukur.

Although details of their discussions were not made known, a highly placed source told our correspondent that Mu'azu begged Obasanjo for support ahead of the 2015 elections.

But a governorship aspirant in the state, Kayode Amusan while speaking with newsmen, said that his visit was not unconnected with the crisis in the state chapter of the party. Amusan described Obasanjo as a strong factor to reckon with in the country's polity, stressing that it would be difficult for anyone to come on board the affairs of the party without visiting the former president.

'Baba has ruled this nation for how many decades? So, you can't rule him out in this country. Of course, in a democratic dispensation, there must be re-grouping, there must be alignment and there must be re-alignment, and that is it. ''No matter what the disagreement, there is need for him to go round and put things together.'

Commenting on the likelihood of resolving the crisis in the Ogun State chapter of the party which formed the basis of Mu'azu's visit, Amusan told journalists that 'the issues of the past are still lingering, you all know where the party structure is. The new chairman will have to look into that.'