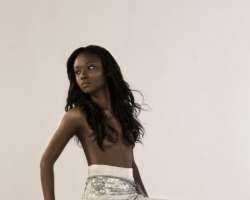 The runner-up of the Africa's Next Top Model, Opeyemi Awoyemi may not have won the competition, but she is surely taking away many positives from the contest. She is beautify and has the aura of a good and quality model, which she makes use of.

Opeyemi, having auditioned for Africa's Next Top Model Cycle 1, was chosen alongside 11 other girls from all over Africa to compete for the grand prize.

At the house, she emerged one of the top three contestants who took the battle to New York, USA to get the winner. She, alongside Aamito from Uganda and Michaela from Angola slugged it out there, but eventually, Aamito was crowned winner of the contest.

Not wanting the exposure gained from the show to waste, Opeyemi recently released some hot photographs.

It is no doubt that she will excel and become one of the top models in the continent. The sky is just the starting point for her.