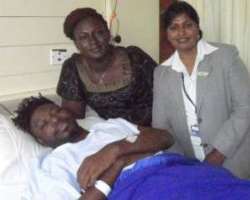 OJB Jezeel has indicated his interest to release his autobiography. The singer-cum-music producer recently returned to Nigeria from India where he underwent a kidney related surgery.

The reported husband of three wives and eight children, in 2013, turned to Nigerians for help. He 'begged' members of the public to raise the sum of N16 million for his medical treatment abroad. It took the intervention of Governor Rotimi Amaechi to quickly help him raise the cash.

Few months after he returned to the country, OJB Jezreel has indicated his interest in writing a book to be titled 'The Celebrated Beggar'. He explained that the book will contain details of his kidney transplant.

The singer's residence is undergoing renovation. He recently had a cameo appearance in Maheeda's music video.