Obasanjo has no personal grudges against Tukur, says aide 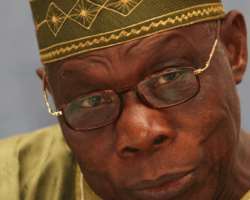 
Former President Olusegun Obasanjo said on Thursday that he had no personal animosity against the former Chairman of the Peoples Democratic Party (PDP), Alhaji Bamanga Tukur.

The Media Assistant to the former president, Mr Tunde Oladunjoye said that Obasanjo had no grudge against Tukur.

'I want you to note that Chief Olusegun Obasanjo has nothing personal against Alhaji Bamanga Tukur,” he said.

Oladunjoye who made a reference to Obasanjo’s recent letter to Tukur said that the former president did not call for Tukur’s resignation.

He said that the issues raised in the letter were purely based on personal principle.

If you look at Chief Olusegun Obasanjo’s last letter to the former national chairman, the issues he raised in that letter were much more than Tukur’s resignation,” he said.

Oladunjoye, however, said that the issues raised in Obasanjo’s letter were yet to be addressed.

Obasanjo had earlier written a letter dated Jan. 7 to Tukur in which he announced his withdrawal from activities of the party at local, state, zonal and national levels.

Obasanjo hinged his reason on the fact that the party had been negating the principles of morality, decency and discipline in its decisions, particularly as it affected the South-West zone.

According to Obasanjo, I also believe that on no account should a known habitual criminal that is wanted abroad to face criminal charges leveled against him should be extolled as a political leader.