PDP: We remain the pre-eminent party, well ahead of opposition 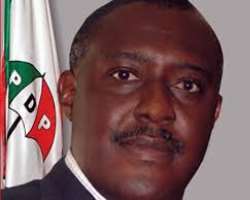 
The Peoples Democratic Party (PDP) said on Sunday it remains the 'preeminent party, well ahead and better than the opposition.'

The party came into this conclusion after thorough appraisal of developments across the country, especially the events of the last few months and submitted that in spite of the challenges, it said in a statement by the PDP National Publicity Secretary, Chief Olisa Metuh.

Metuh said in the statement that the party is 'still the most organized party in Nigeria with genuine followership in all the nooks and crannies of the country' .

According to him, more people are eager to join the PDP  platform.

He said, 'The PDP is a party founded on democratic ideology by worthy and respectable leaders. It is the only party committed to the national interest, in which no person, group, tribe or religion can claim to play dominant role.

“We have remained strictly committed to our ideology based on the principles of patriotism and service to the people and this explains why self centered and undemocratic elements find it very difficult to adapt to the dictates of the party'.

The party added, “the challenges that faced the party will enlarge, rather than shrink its support base, the PDP said the developments have shown that the opposition are merely a group of selfish religious and ethnic bigots, completely lacking in ideology and pursuing a selfish agenda.”

It further stated that while the opposition 'is at liberty to enjoy some space in the media to exercise their penchant for propaganda and hollow claims, it has become obvious that they lack true followership among the people and cannot match the PDP at the general elections.'

PDP, according to the statement, believes Nigerians have become better informed and that 'the nation will soon witness a galore of entrance into its fold'.

The party commended President Goodluck Jonathan for his steadfastness in delivering on his Transformation Agenda and not allowing himself to be distracted by the antics of the opposition.

It however charged all its elected and appointed officials at all levels to redouble their efforts and work harder by curbing all wastes and keep on being prudent in handling the nation's resources to ensure that Nigerians not only continue to enjoy the benefit of having the PDP in power but also vote en-masse for it in the general elections.

'We have noted the steadfastness and vigour with which President Goodluck Jonathan has been pursuing his Transformation Agenda despite efforts by the opposition to distract and take him of the course. We commend him for the initiatives resulting in the accelerated development of key sectors of the economy', the statement said.

The party also applauded the President for his initiatives towards the technological advancement of the country citing the establishment of the National Institute of Construction Technology in Uromi, Edo state, the new national automobile policy and the implementation of power sector reforms among others.

It urged Nigerians to continue to support the PDP, noting that it remains the only party that can guarantee a government committed to the national interest and the welfare of all at all times.