Simon Kolawole: OBJ and the manual he forgot at Aso Rock 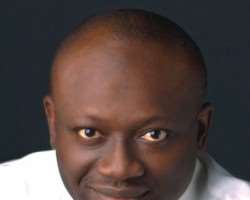 
Former permanent secretary in the Ministry of Defence, Dr. Julius Makanjuola, was being tried for corruption under Obasanjo's government. Suddenly, the government entered a plea of nolle prosequi - reportedly the first in our history - and set the man free. In 2000, the Speaker of the House of Representatives, Salisu Buhari, was convicted for perjury. Obasanjo pardoned him instantly.

Once upon a time, there was a king that reigned over Nigeria in majesty and grandeur. When he ascended the throne in 1999, he developed a Manual on how to rule Nigeria. He enjoyed the 'ogbono' soup in Aso Rock so much that he did not want to leave after spending eight years and two terms. He wanted a third term. His manipulation to rewrite the constitution failed spectacularly at the National Assembly, and he hurriedly left power in humiliation in May 2007. He forgot the Manual in the side drawer of his bed. Alas! One of the successors discovered the Manual and started borrowing from it.

The first chapter in the Manual is 'clannishness'. Having been elected president in 1999 in spite of his own people rejecting him, President Olusegun Obasanjo made underground moves to get their support. In no time, Afenifere, under Chief Abraham Adesanya, started issuing threats, warning that nothing must happen to 'our son'. Oodua Peoples Congress (OPC) began to 'uncover' plots by the North to kill Obasanjo - on a daily basis. They threatened that Nigeria would burn. When the House of Representatives began impeachment moves against Obasanjo in 2002, Governor Lam Adesina of Oyo State warned that the Yoruba would not allow their 'son' to be humiliated by the North.

And it came to pass that when President Goodluck Jonathan got to Aso Rock in 2011, he read chapter one of the Manual and liked it. It worked for Obasanjo, so it must work for me too, he told himself. So Ijaw leader, Chief EK Clark, began to issue threats, warning all of us that nothing must happen to 'our son'. Militant leader, Mujahid Asari Dokubo, started spitting venom and acid, warning that Nigeria would catch fire if Jonathan was not allowed a second term. The oil that keeps Nigeria looking like a political entity 'is from our soil' and 'if our son is not good enough to be president of Nigeria, then our oil is not good enough for Nigeria'. And Obasanjo wrote to Jonathan, accusing him of 'clannishness'.

The second chapter is 'tenure'. When Chief MKO Abiola drank tea and died in military custody in1998, Obasanjo emerged from prison to become president. It was said that he had entered into an agreement with the Northern establishment to do only one term. Gen. Ibrahim Babangida's in-law, Chief Sonny Okogwu, and several Northern leaders told the world that Obasanjo had a pact to do only one term. Not only did Obasanjo do a second term, he even wanted a third term. Meanwhile, Jonathan is also said to have agreed with the North to do only one term when he was seeking power in 2011, but now he wants a second term.

And Obasanjo wrote to Jonathan, saying seeking a second term will be 'fatally morally flawed'.

The third chapter is 'leniency on corruption'. Former permanent secretary in the Ministry of Defence, Dr. Julius Makanjuola, was being tried for corruption under Obasanjo's government. Suddenly, the government entered a plea of nolle prosequi - reportedly the first in our history - and set the man free. In 2000, the Speaker of the House of Representatives, Salisu Buhari, was convicted for perjury. Obasanjo pardoned him instantly. Men and brethren, in 2006, some federal lawmakers were reportedly bribed with N50 million to support Obasanjo's third term plot. So it came to pass that Jonathan granted pardon to former Bayelsa governor, Chief DSP Alamieyeseigha, who was jailed for corruption. Jonathan has subsequently toyed with several cases of corruption involving his ministers, notably the bullet-proof car scandal.

And Obasanjo wrote to Jonathan, lambasting him for being 'soft' on corruption.

The fourth chapter in the Manual is using 'region and religion' for political end. Confronted with a strong opposition from the 'core North' (in the form of ANPP), Obasanjo knew that getting re-elected in 2003 was not going to be tough. He played the Christian North against the Muslim North in the polity and in the military. He begged his 'people' in the South-west not to field any candidate against him. So the Alliance for Democracy (AD), which controlled the South-west states, decided to vote for 'our son' in pure ethnic solidarity. Jonathan, confronted with yet another strong opposition from the 'core North' (increasingly gathering in the APC), is adopting the same Obasanjo tactics as 2015 approaches. And Obasanjo wrote to Jonathan, accusing him of using 'region and religion' for politics.

Verily, verily I say unto thee, Nigerians shall continue to be divided over how to respond to Obasanjo's 'letter bomb'. Some will say he has no moral right to criticise Jonathan because he that comes to equity must come with clean hands, even if the issues he raised are quite weighty. Others will argue that we should listen to the message and ignore the messenger. And so, Sheikh Abubakar Shekau, the Boko Haram leader, can pick his pen today and write a letter to Asari Dokubo to accuse him of terrorism - and Nigerians shall say: 'Listen to the message and ignore the messenger!' And, by the way, Jonathan has opened yet another chapter in the Obasanjo Manual. He is reading it day and night, with all the concentration and seriousness it deserves. The title is: 'Getting re-elected in a do-or-die affair.' Lobatan!

And Four Other Things… IYABO'S 'LETTER' Did Senator Iyabo Obasanjo-Bello actually write that stinker of a letter to her father, former President Obasanjo? The details are too intimate, too microscopic, too exact to be fictitious. It is either Iyabo poured out her heart to a confidant who now decided to write the letter - or she wrote it herself in one moment of anger. Whatever the case is, it is a damning verdict on a father by a daughter. Obasanjo, undeniably one of the best leaders Africa has ever had, is a monumental moral disaster.

SANUSI'S BLUNDER So $49.8 billion is not missing after all? CBN governor, Mallam Sanusi Lamido Sanusi, had written a letter to President Jonathan alleging that the NNPC had not accounted for such a huge amount of revenue from crude oil sale. It has turned out that only $10.8 billion or thereabouts is yet to be unaccounted for, and the accounts are still being reconciled. But I admire Sanusi for openly admitting his mistake, even tendering an apology. This is very unNigerian. But he needs to get his math right next time. It was an embarrassment.

DEMOCRACY INDEED Minister of State for the FCT, Olajumoke Akinjide, has told Premium Times she would remain in the PDP even though her husband, Ahman Pategi - a member of the House of Representatives - has defected to the APC. It reminds me of my grandparents. Both were in the UPN in 1979, but my grandfather defected to the NPN in 1983. In 1991, my grandfather was in the NRC and my grandmother SDP. During the open ballot system, they stood behind different candidates at the same polling unit. And they still lived peacefully together under the same roof! Wow!

SOUTH SUDAN I hope the advocates of balkanisation are watching events in South Sudan. Two years ago, these guys voted 99% to break away from Sudan. They were over the moon. Finally, they had a country of their own! But two years on, the balkanisation has not ended, as the Dinka ethnic group and their rival, Nuer, are now engaged in armed conflict, euphemistically described as a 'coup'. Balkanisation is not a magic formula, and I hope agitators for the atomisation of Nigeria will learn one or two lessons from South Sudan.