By The Nigeria Camera 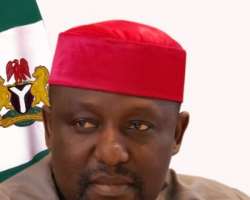 Unlike the incumbent coronation of the All Progressive Grand Alliance [APGA] candidate in the recently concluded gubernatorial elections in Anambra State on November 16, 2013, the Imo State gubernatorial election poses new unfounded threats to the candidacy of the All Progressive Congress [APC] candidate. Information recently made available to 247ureports.com indicate that a deep reaching conspiracy against the candidateship of an APC gubernatorial quest in the 2015 exercise appears on the offing in the Imo state political theater.

The political imbroglio in Imo state dates to the uncelebrated ejection of the onetime federal minister under the administration of late President Yar'Adua – Captain Iheanacho – who was tagged a decedent to the presidency and to PDP. The then embattled Governor of Imo State, Mr. Ikedi Ohakim and his group were alleged to have been responsible for the allegations leveled on Captain Iheanacho. Captain Iheanacho's embarrassing exit resulted in the creation of another latent divide within the PDP in Imo State.

In addition, the uncelebrated loss of the PDP at the Imo State gubernatorial elections saw Ohakim's powers within the PDP dwindle and his influence within the party in Imo State reduced considerably. Ohakim's weakened political stature in the state further opened the door to new political opportunities for some stakeholder's within the PDP. One of the personalities benefiting from Ohakim's downfall was Captain Iheanacho moved into the driver's seat to pilot the affairs of the party in the State.

As a result, the PDP politics in Imo State appears to have turned a new corner. Sources near the Owerri political theater point to a new effort by Captain Iheanacho to mount a battle to recapture the governorship seat for the PDP. Particularly, a competent source informed 247ureports.com that Iheanacho had begun financing a comprehensive campaign against the APC led government in Imo State. His campaign mantra, according to a source, is to reduce the popularity of the Imo State government and to incite the members of the Imo state house of assembly into commencing an impeachment move against the governor. Also, the PDP stakeholder is reportedly making moves towards swaying the judiciary into action against the APC administration in Imo State.

It was gathered that although the PDP bigwigs view Captain Iheanacho with considerable apprehension, they however are welcoming of Iheanacho's actions against the Okorocha led administration. In cohorts with the Abuja wing of the PDP, Iheanacho is said to have commenced a more proactive action towards stripping of Okorocha's governorship mandate. Our source indicate that an estimated sum of N750million have been expended towards this ordeal – with an additional N750million earmarked for the year 2014 and pre-election activities.

APGA, on its part, is reported to also have its efforts enmeshed alongside the PDP in its quest to unseat the APC government in the Imo State. A synergy is reported to exist between the APGA and PDP – the likes witnessed in Anambra State – where the national body worked tirelessly to deliver electoral victory to the APGA candidate – against the PDP. The similar scenario is believed to be unfolding in Imo State. The national PDP body is believed to have a closer relationship with the APGA chapter in Imo state than it does the PDP chapter.

Sources within the Imo State chapter of PDP reveal to 247ureports.com that the moral level of the PDP members within Imo State have reached an all-time low due to the national body's body language towards the party. One of the sources started that the leadership of the national PDP have opted to work together with the state APGA in Imo State. This was because the national PDP has lost trust on the actors involved in the Imo State PDP – the Ohakim faction of the PDP who are said to be contenders to the leadership role of the party are faced with caustic tussle for leadership with the Iheanacho group.