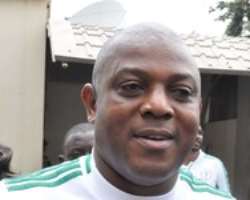 
The Confederation of African Football (CAF) on Tuesday announced the top three players for the 2013 African Player of the Year award, scheduled for January 9 in Lagos.

Nigeria's John Obi Mikel, who is of Chelsea FC of England, is joined by the Ivorian pair of Didier Drogba and Yaya Toure .

Toure, who plays for English side Manchester City, and former Chelsea FC striker Drogba are making the final three for a second successive year.

Midfielder Toure is the reigning player of the year, having won the 2012 award earlier this year.

In the African Player of the Year award for footballers based in Africa, whose 2012 edition was won by Egyptian Mohamed Aboutrika, another Nigerian is in contention.

The 2013 winner will be selected from the trio of Super Eagles' Sunday Mba and Egyptians Ahmed Fathy and Aboutrika.

The winner will also be announced at the Awards Gala.

In the other categories, Nigeria is being considered for the National Team of the Year alongside Burkina Faso and Ethiopia.

For the Youth National Team of the Year, Nigeria's under-17 men team, the Golden Eaglets, are the sole candidates, after securing the country's fourth world title last October in the UAE.

African club champions Al-Ahly of Egypt and CAF Confederation Cup holders CS Sfaxien of Tunisia are under consideration for the Club of the Year award.

They are joined by the 2013 CAF Champions League finalists, Orlando Pirates of South Africa.

Nigerian supporters are also the sole candidates for the Fair Play Award, with the Nigeria Football Supporters Club (NFSC) sure to step out for the award.

Golden Eaglets' Kelechi Iheanacho is under consideration for the Most Promising Talent award, alongside Ebenezer Assifuah and Saleh Gomaa.