As The House Of Reps Revisits The Impeachment Clause 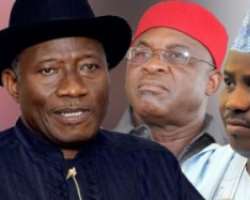 In this piece, JOHN AMEH X-rays the impeachment clause in the 1999 Constitution and a renewed attempt by the House of Representatives to simplify the process of impeaching the President and the Vice-President

The beauty of democracy rests largely on inbuilt checks and balances. It also provides the latitude for the minority to have their say, while the majority has its way.

In theory, there is a separation of powers between the Executive, the Legislature and the Judiciary which constitute the three arms of government. However, in practice, what exists is interdependence.

Under a Presidential system of government, the constitution confers enormous powers on the head of the executive branch who is the President.

It however gives the legislature a leash with which to ensure that such powers are not abused.

Of all the powers vested on the legislature to keep the President in check, the most potent is the power to impeach and possibly remove him/her from office.

To impeach is to accuse, indict, incriminate, charge or arraign before a tribunal and eventually to remove from office.

This power has over the years been used to threaten sitting Presidents. Nigerian has so far had four elected Presidents since 1979, none has been impeached.

It is however worthy of note that the closest the National Assembly has gone in an attempt to use this power was on August 13, 2002.

The then House of Representatives led by Ghali Umar Na'Abba handed President Olusegun Obasanjo a two-week ultimatum to resign or be impeached.

The lower chamber of the National Assembly at the time accused the President of committing 17 constitutional infractions some of which include his 'illegal' deployment of troops to 'murder' innocent civilians in Odi and Zaki Biam as well as refusal to pay deserving states the 13 percent derivation among other offences.

A political solution was found to the problem with dire consequences for those who dared to go beyond mere threats.

The process of democratically removing a sitting President from office is a tedious one.

In a bid to simplify the process, the Mr. Emeka Ihedioha-led Ad Hoc Committee on the Review of the 1999 Constitution, proposed an amendment to the existing law.

A bill to this effect was sponsored by Mr. Yakubu Dogara and three others. The bill seeks to delete Section 143 from the 1999 Constitution and replace it with a new one.

The long title of the bill reads, 'A Bill for an Act to Alter the Provisions of Section 143 of the Constitution of the Federal Republic of Nigeria, 1999 to Remove Ambiguities in the Process of Removal of the President and the Vice-President from Office on Allegation of Gross Misconduct and to Provide for a More Transparent and Democratic Procedure for Impeachment and for other Matters Connected Thereto, 2013.'

Under the proposal, the process of impeaching the President and the Vice-President will start from the House of Representatives and end with the 'trial' of the offender by the Senate, where the Chief Justice of Nigeria will preside.

The current provision stipulates among other things, that the President or Vice-President may be removed from office on the completion of a process which starts with the signing of a petition against the President by at least one-third of members of the National Assembly.

The signed document which is expected to state that the President is guilty of gross misconduct in the performance of his functions is then presented to the Senate President.

He shall notify the President within seven days of the receipt of the impeachment notice.

Copies of the notice must also be given to individual members; the Senate President is also required to give each member a copy of the President's reply.

A two-thirds majority of members is expected to vote in support of an investigation before such can be carried out.

The Chief Justice of Nigeria shall within seven days after the passage of the motion, request the President of the Senate, to appoint a Panel of seven persons of unquestionable integrity to investigate the allegation(s).

A President who is being investigated shall have the right to defend himself in person and or be represented before the Panel, by legal practitioners of his choice.

The panel is to report its findings within three months if the allegations are not proved, the impeachment proceedings ends.

However, where the panel proves the allegation(s) and reports same to the National Assembly, each chamber is expected to consider the report, and if by a resolution of two-thirds majority of all members, the report of the Panel is adopted, then the holder of the office shall stand removed from office as from the date of the adoption of the report.

For the new bill, this extant procedure is 'cumbersome.'

The new bill simply empowers the Committee of the House of Representatives on Judiciary to decide when to initiate impeachment once allegations of 'gross misconduct' are leveled against the President.

Sub-section 2(a) stipulates that once such a decision is made, the 'Chairman of the Committee on Judiciary of the House of Representatives shall propose a motion for the allegation to be investigated

A simple majority is all that is required to commence investigations.

The bill provides that, the committee shall present its findings to the House, indicating whether the impeachment is called for or not.

Sub-section 4, provides that, if any article of impeachment considered by the House is approved by a simple majority vote of members present, 'the President or Vice-President shall be impeached.'

Following the impeachment by the House, the bill provides that, the 'Speaker shall within seven days, transmit the House resolution to the Senate for trial.'

Upon reaching the Senate, the upper chamber is also required within seven days to 'formulate rules and procedures for holding a trial of the impeached office-holder.'

According to the new bill, the trial shall take place within 14 days at a session 'presided over by the Chief Justice of Nigeria,' while a select committee of House members shall serve as 'prosecutors.'

The bill provides further, 'The Senate shall within seven days after the trial, consider in a closed session, the verdict and within 14 days after consideration, vote in plenary on a verdict.'

Sub-section 8 stipulates that, should the Senate's verdict concur with the resolution of the House, two-thirds majority of Senators present shall vote to convict the office-holder, 'and the holder of the office shall stand removed from office.'

The Senate is given the discretion to decide whether the impeached office-holder should be banned from holding public office or a position of trust in the future by a simple majority vote.

Having been impeached, Sub-section 9 disallows any court from entertaining litigation in respect of the matter. This agrees with part of the existing law.

At a recent public hearing on the proposed piece of legislation, the Nigeria Labour Congress agrees that Section 143 as it stands today is 'cumbersome, ambiguous, fettered, time-consuming and not intended to achieve the result of effecting change.

Mr. Benson Upah, who represented the NLC President at the hearing, said the President himself knows that it is almost impossible to impeach him under the present law.

This, he said, encourages him to treat resolutions of the National Assembly with levity.

He said, 'This no doubt defeats the letter, spirit and essence of the principle of separation of powers.

'It needs no stating that democracy suffers when checks and balances go with the wind.

'When democracy suffers, the rights and privileges of the citizenry also suffer.

'In other words, it is the precursor to dictatorship or tyranny.'

The NLC equally noted that much as the proposed change was welcomed, utmost sense of responsibility and decorum should come with the reviewed powers of the National Assembly.

The labour leader said this was required in order to minimise or eliminate the temptation for abuse.

Contributions at the session generally took after that of the NLC, with some supporting the new bill and others are foreseeing danger of possible abuse.

Some contributors noted that the 'exuberant conduct of most members of the House' could drive them to initiate the impeachment of the President at the slightest provocation.

The bill is not yet a law. From the public hearing, the Ihedioha committee will report to the House on its findings.

Members will consider the report on the bill in plenary and either endorse it or reject it.

To approve this proposed amendment, two-thirds (240) of the 360 members of the House must vote to accept it.

Similarly, Senate must also endorse the bill as an item to be included in the new constitution by two-thirds majority vote.

The final lap is the approval by two-thirds (24) vote of the 36 state Houses of Assembly for any change to be effected in the constitution.

Will simplifying the impeachment process curb executive excesses? only time will tell.