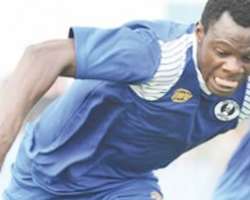 Enyimba captain Chinedu Udoji has exclusively told National Mirror he's still mulling over switching to Kano Pillars ahead of next season. Pillars have reportedly showed interest in brining the hard defender to Kano as they continue to strengthen the team ahead of their Champions League campaign.

Udoji admitted Pillars' interest but maintained he was taking a lot of things into consideration before he would make a final decision.

The Kaduna-born star caught the eye of the League champions with his robust style of play and outstanding leadership qualities.

'It's really going to be a tough decision for me but I'm taking my time and things easy and with time, I will know where I will be heading to,' Udoji explained.

'It will be a tough decision to leave Enyimba but let's see how it goes. There are certain things I'm looking before I reach a decision and until then, I still remain Enyimba player.'

Udoji has remained a major force in the Enyimba rear since he joined the People's Elephant few seasons ago. He played a huge role in their 2011 Champions League campaign, reaching the semi-finals, painfully losing 1-0 in goal aggregate to Morocco's Wydad Casanblanca.