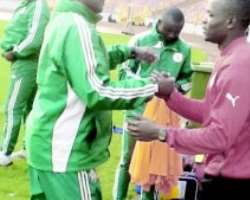 Nigeria coach, Stephen Keshi, yesterday, began the gradual process of elimination by substitution when two players were dropped from the Super Eagles' camp preparing for the African Nations Championship (CHAN) holding in South Africa next month.

The two players decamped because of low productivity are midfielder Mohammed Ajia of Bayelsa United and Elkanemi of Borno defender, Reuben Ogbonnaya.

The four players who are expected to join the squad in Abuja immediately are the Bendel Insurance duo of Obannu Erhune, who plays for the Benin side in the central defence position and his teammate, Ikeleji Bello, who is central defensive midfielder.

Others are Warri Wolves Ewenike Achibi also a midfielder and Mfon Udoh who recently crossed from Akwa United to Enyimba of Aba.

Keshi, who spoke through his assistant, Daniel Amokachi, said there was little or no time to prepare the squad before the CHAN kicks off on January 11 in South Africa, hence the need to quickly identify tournament materials.

'We have been tracking these players for some time now and we want to give them a chance to prove themselves at a critical point like this and we hope they won't disappoint,' Amokachi declared.

National Mirror learnt that more players who fail to measure up will be asked to go by the weekend after today's warm up match against Niger Tornadoes of Minna and another practice match that has been scheduled for Saturday both at the Main bowl of the Abuja National Stadium.