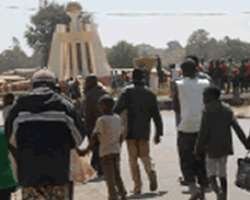 Senate condemns Jos massacre
…As former Yobe gov says it's failure of PDP govt
From AMOS DUNIA, Abuja
Tuesday, March 9, 2010
The Senate on Monday took a critical look at the massacre in Jos Plateau State in the early hours of Sunday declaring that it can no longer tolerate the lawlessness and continued terrorism in Nigeria. In a statement issued by Senate spokesman, Senator Ayogu Eze, the upper chamber of the National Assembly noted that at a time efforts were being made to restore the nation's battered image, some miscreants, disgruntled and misguided people were dragging the hand of the clock backwards.

While condemning the yet another eruption of crisis in Jos, the Senate tasked security operatives to fish out the perpetrators of the heinous crime against humanity, no matter whose ox was gored.

According to Senator Eze; 'The Senate is again alarmed at the fresh hostilities that claimed hundreds of lives and properties in Jos, Plateau State, on Sunday. The Senate as an institution cannot reconcile this latest mayhem where armed men invaded harmless communities in the wee hours and opened fire on defenseless civilians.'

The statement further explained that as an institution, it cannot understand the ugly and unfortunate development at a time efforts are being made to find a solution to the previous crisis.

'As in the previous case, we condemn these acts of terrorism on the Plateau in no unmistakable terms. All the security operatives should by now be challenged and should urgently deploy their expertise to bring this to a halt. Their efforts would have been in vain if the perpetrators are not unmasked and brought to judgment,' Senator Eze said.

Meanwhile, former governor of Yobe State Senator Bukar Abba Ibrahim has said that the incessant occurrence of crisis leading to the death of hundreds of people in Plateau state was as a result of failure of the PDP led government to provide security for Nigerians.

Senator Ibrahim told journalists in Abuja at the National Assembly on Monday that if the PDP led Federal Government had lived up to expectations by providing adequate security to protect the life and property of the people, the crisis would have been adequately addressed.

According to Senator Ibrahim; 'The PDP has failed so many ways and Nigerians are tired of this successive failure of governance. The people are fed up with this ultra-conservative party and its misrule'.

Senator Ibrahim further said; 'There have been governors in Plateau State before PDP came and we did not witness this kind of thing until now that the PDP is in charge. It happened during Dariye and it is now happening under the watch of Jang the same PDP governor. No governor has ever allowed the situation in Jos to deteriorate to this level.'

The former Yobe State governor noted that when a governor under the platform of the Social Democratic Party (SDP) ruled Plateau for two years, there was peace in the State without any killing and maiming of people like it is happening now.