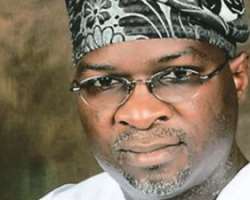 
The claim last month by Governor Babatunde Fashola that Lagos required N51 billion annually to fund police operations in the state is a poignant wake-up call to Abuja to stop abdicating its responsibilities to the former federal capital. Fashola had painted a worrying picture of the financial challenges Lagos is facing in meeting the security needs of residents and businesses. Among those needs are 9,000 patrol vehicles that cost N5 million each and would require N6.3 billion to fuel. In order not to reverse the gains of the relative security the state has been enjoying since 2007 when the current administration launched the Lagos State Security Trust Fund, it is vital that the Federal Government supports the initiative.

Fashola said the state government would have to fund its security needs in batches since it cannot source the N51 billion each year yet. 'The state does not have such resources, either from our direct government spending on security or from the support that you citizens give through the Security Trust Fund. The tentative cost (today) of this critical intervention…for one year is about N2.3 billion. While this will help our crime prevention strategy, it won't deter all crimes.' Being the commercial hub of the country and also importantly, the former federal capital until 1990 when the seat of government moved to Abuja, Lagos has suffered neglect by successive federal administrations, both military and civilian. It is not right, and the Federal Government can, and should reverse the situation by helping out.

According to official figures, 32 policemen were killed by robbers in Lagos in 2012, up from 19 the previous year, while 140 robbers were gunned down by the police, down from the 164 of the preceding year. One hundred and twenty-three cases of armed robbery were reported in the state in that same year; the police arrested 569 robbery suspects and recovered 26,058 pieces of ammunition in the period. Other forms of violent crime like car snatching, rape, attacks on Automated Teller Machines and murder are a painful fact of life in the metropolis. It is the duty of government to rein in the criminals.

Yet, Lagos has a daunting task ahead of it. A new threat has surfaced with the recent influx of suspected Boko Haram agents into the state. On November 27, 17 Boko Haram terror suspects were arraigned at a Federal High Court in Lagos following their arrest by security agents for allegedly plotting terrorist acts. Curtailing the mindless insurgents, who are fleeing from the military offensive in the North-Eastern states, demands new thinking, new focus, modern crime-bursting tools, well-motivated officers, infiltration of crime/terror networks by undercover security agents and adequate funding. This requires the leading input of the Federal Government, which, constitutionally (there is no state police in Nigeria), controls all the apparatus of security as of today.

Earlier before the 17 terror suspects were arraigned, there had been real threats of terror in the state that were nipped in the bud. In February, security agents arrested three suspects, led by one Abdullahi Berende, for allegedly running an Iranian-funded terror cell in Lagos. According to the State Security Service, the suspects were spying on American and Israeli interests in Lagos with the aim of attacking them. In October 2010, an Iranian, Azim Aghajani, was arrested by security officials at the Apapa Ports in Lagos for allegedly importing 13 containers of arms. The case is still in court.

Combating crime needs the involvement of all levels of government, but also requires the close cooperation of citizens, the diligence of the police and the ability of the judiciary to make ample examples of culprits as a deterrent. The Federal Government should show greater commitment to security in Lagos as it is doing in Abuja. As a matter of urgency, the Closed Circuit TV project that was started two years ago but has since been abandoned, should be revived and completed. CCTV is a major tool for deterring criminals, and even when people commit crimes, they are detected through the device. A recent example is the way the Tsarnaev brothers - Dzhokhar and Tamerlan - were tracked down with the aid of CCTV replays after they bombed the Boston Marathon in the United States last April. Also, Lagos State must step up on its Neighbourhood Watch project, ensuring that the people are active participants in their own security at the grass roots by giving information to security officials. There is a need to increase the two emergency numbers - 767 and 112 - the public can use to reach the security agencies in case of criminal attacks.

In 2012, the cities of London (United Kingdom) and New York (US) demonstrated that with concerted efforts, crime can be reduced in mega cities. The methods the police employed included patrolling 'the public space, stop-and-search tactics, youth engagement strategies and education,' according to a London police chief. Firearms were also recovered from criminals, while violent gangs were tackled. These aspects require intelligence and infiltration of criminal gangs.

Security is not a stand-alone effort. Security is more assured in well-governed states as obtains in the Scandinavian countries where crime rates are persistently low. The Federal Government should invest massively in education, health, power and infrastructure like roads, railways and maritime. This will have spin-offs in reducing unemployment and curb youth restiveness, one of the main pivots of crime.

Nigeria must commence the move to having state police. The present federal police structure has failed to deliver security at the state level. The Constitution should be amended to allow for state police with the commensurate allocations through a new and more realistic revenue sharing formula.