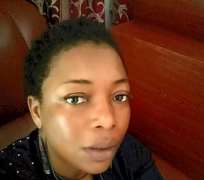 In her 40s,star actress, Bimbo Akintola is yet to be holed up by a man under the canopy of marriage. Her several years relationship with Dede Mabiaku, which many had thought would lead to marriage which was not be as Dede went ahead to marry another beau, is still very fresh in the minds of people.

Also her planned wedding to Jide Alabi, a showbiz star and sport Analyst on Silverbird TV also failed mid way. With this, many still wonder when the wedding bells will ring for the sultry actress who no longer has age on her side. But as for her, God's time is simply the best."I will marry when God says yes," she recently hinted in a chat.

And asked whether she's set her standards too high in the marriage department, she replied. "I am not looking for Mr. Perfect. I know you can't get that anywhere. My ideal man is a normal person, loving and appreciation person, loving and appreciative". Meanwhile its being speculated that her indulgence in cigarette smoking and heavy alcohol consumption are major reasons she's still single.