Nigerian Breweries dips most in 2 weeks as earnings miss target 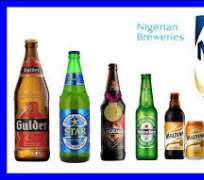 The stock of the West African nation's biggest brewer snapped four days of gains, retreating 1.1 percent to 174 naira at the 2:30 p.m. close in Lagos on Wednesday, which is its the biggest closing decline since Oct. 7.

Nigerian Breweries' relative-strength index rose on the day  above 70, according to data compiled by Bloomberg, a level that signals to some technical traders a stock is overbought.

'Earnings were below our expectations as volume growth disappointed,' Esili Eigbe, a Lagos-based analyst at Stanbic IBTC Holding Co. (STANBIC) with a sell rating on Nigerian Breweries, wrote in a client note  according to Bloomberg. 'Softness in consumer spending in Nigeria has resulted in weaker beer volume growth as the Nigerian consumer prioritizes spending.'

The company's stock has advanced 18 percent this year, compared with the 33 percent gain of the Nigerian Stock Exchange All-Share Index. (NGSEINDX)