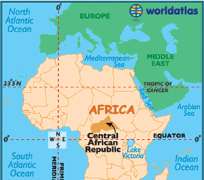 The Central African Republic (CAR) is a landlocked country in Central Africa. It borders Chad in the north, Sudan in the northeast, South Sudan in the east, the Democratic Republic of the Congo and the Republic of the Congo in the south and Cameroon in the west. CAR is literally situated at the center of our continent; therefore any occurrence in that country has direct impact on other parts of Africa.

A former French colony, CAR became an independent nation on 13th August 1960. For over decades after independence, the Country was ruled by leaders who either were un-elected or who took power by force.

The first multi-party democratic elections in the CAR were held in 1993, with the support of the country's donors and help from the United Nations. The elections brought the late Ange-Félix Patassé to power, but he lost popular support during his presidency and was overthrown in 2003 by General François Bozizé. General Bozize organized and won a democratic election in May 2005. His rule was characterized by instability due to his government inability to pay public sector workers leading to strikes. In the mixt of difficulties and postponement other elections were held in January and March 2011 which were won by Bozize and his party.

Regardless of the challenges he went through during his past leadership Bozizé's rule was again engulfed in corruption, nepotism, authoritarianism etc., which led to an open rebellion against his government. The rebellion was led by an alliance of armed opposition factions known as Seleka Coalition which eventually took power in March 2013.

The Seleka was a highly heterogeneous coalition that lacked discipline and leadership this led to unleashing of violence on innocent citizens. There is, equally, an increasing religious intolerance and factionalism taking root in the country. The new President Mr. Michel Djotodia, in an attempt to bring the situation under control, decided unilaterally to dissolve the Seleka Coalition. The question is does-he have control over that coalition before being in the position to ban it? At the same time other rebellion groups have already emerged to unseat Djotodia. Clearly CAR can become a sanctuary for all kind of extremist groups due to its permanent instability. This will have dire consequences for the whole continent and the rest of the world.

The International Community and the African Union in particular must not accept that situation. The responsibility of the political leadership in this sad situation cannot be over-emphasized. In fact the political class of CAR has shown its ineptitude to bring peace, stability, democracy and development to their country.

Therefore it becomes incumbent on the International Community and particularly the African Union (AU) to take its responsibilities to bring normalcy in CAR in the interests of the people.

Against the aforementioned we, in the All Africa Students Union (AASU), call for a more direct and robust intervention of the International Community under the leadership of the UN in CAR or to put it under the tutelage of the AU until the establishment of credible and solid republican institutions capable of safeguarding the integrity, stability, peace, democracy and development of that country.