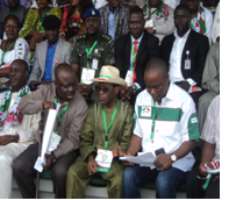 August 31, 1998 will remain a landmark day in the history of Nigeria. That was the day that the Peoples Democratic Party was presented to Nigerians, In other words, the party is now fifteen years old.

This past week, I was one of the accredited media personnel that attended the Special National Convention at Abuja Eagles Square. Prior to the the actual convention, there was a press briefing at Legacy House 3 days earlier. I found it irritating that most people avoided the “Elephant in the room”, which was the preparedness of the PDP for legal dispute concerning States with divided EXCO and its unavoidable delegates' issues. I posed the question to the Chairman of the Special Convention Committee, Prof. Jerry Gana, who answered it completely by informing us that the National Executive Council (NEC) has already tackled the matter.

For the convention, one of the highlights was the eloquent speech by the Deputy Chairman of the Special National Convention and Chairman of PDP Governor's forum, Chief (Dr.) Godswill Akpabio, CON of Akwa Ibom State. I should dub him “Mr. PDP No shaking” because he used the phrase “No Shaking” so many times that the President could not help but repeat it. According to Governor Akpabio, “of the 36 States in the federation, the ones with the best development are those controlled by PDP.” Of course, PDP controls 23 of the States of the federation .In the opinion of Chief Akpabio, “PDP is Nigeria. Anything that happens to PDP happens to Nigeria.”

The National Chairman Alhaji Bamanga Tukur had preceded Governor Akpabio by saying that “after this convention, we shall confront the opposition.” That could be interpreted as a declaration of war or drawing the proverbial line (political) on the sand.

There were other intrigues at the Special Convention. Former President Olusegun Obasanjo, GCFR, was conspicuously absent from his Ogun State delegation. Rivers State delegation did not have Governor Rotimi Amaechi, but the factional Chairman Felix Obuah was visibly present. Taraba State was led by the acting governor Alhaji Garba Umar, ably “supported” by the Speaker of the Taraba House of Assembly Hon. Haruna Tsokwa. Anambra had its share of commotion with the Ubas and Nwoye fighting for attention and not just who is the real PDP governorship candidate for the upcoming November election. Let us not forget that there are at least two pending court decisions.

The purpose of the Special convention was to fill eighteen positions, which was necessitated by INEC's ruling. However, several had only one contestant. What impressed me was that all delegates queued up in lines to vote, a veritable display of our democracy.

Delta State had a colorful contingent that included the State party chairman Chief Peter Nwoboshi, the Governor Dr. Emmanuel Uduaghan, the Deputy Governor Prof. Amos Utuama, the Speaker of Delta State House of Assembly Rt. Hon. Engr. Victor Ochei and other statutory delegates. There was no drama in Delta State section and I was impressed with the orderly, quick and peaceful voting by Delta delegates.

The title for this article was stolen partially from the address of His Excellency, President Goodluck Ebele Jonathan, GCFR. In his address, numbered from 1 to 72, he went over developments in the country since PDP came into power in 1999. In item number 18, he mentioned that “as we approach the 2015 general elections, many doomsday scenarios are being propagated.” I believe he may have been referring to the forecasted dethroning of PDP at the national level, not the American prophesy of the country splitting. Nonetheless, it is for you my readers to decide if the doomsday scenarios have been repudiated. Time will tell.

It will be good to review some of the statements by our educated excellent Excellency. His speech was severally punctuated by “These are facts our critics never wish to acknowledge.” (See speech line items # 20, 22, 26, 27, 43). The truth is that those in the diaspora like me have seen changes in the country within the past 14 plus years that encouraged us to return. It does not matter who you ascribe it to, but the changes must be acknowledged by any unbiased person.

One interesting point by the President is that “telephone penetration has gone from 400,000 lines in 1999 to over 120 million today. Our telecoms sector has grown to be the biggest in Africa and one of the fastest growing in the the world; providing jobs for millions of Nigerians and creating a new generation of successful entrepreneurs and industrialists.” You do not need to mention any carrier to agree with this very valid point. Whether it be the recharge card vendors or the mobile money operators, we have a new breed of small businesspersons.

We were also reminded by his Excellency that the banking sector is flourishing and strengthened. The President received applause when he stated that to “to deepen our federalism and ensure access to quality education, we established nine new universities in the North and three in the South, in states where no federal university previously existed.” Other highlights of his speech included the making of agriculture as the fulcrum of Nigeria's industrialization, revitalization of the railways industry, transformation of our federal capital city and remodeling of all 22 federally owned airport terminals

The President considers “PDP as the party of patriots” and further pointed out beyond cavil, that of all the three political parties registered in 1998, PDP is the only one to have not changed its name, logo or core values. Another undisputed fact is conceivably that PDP “is the only Nigerian party that is not aligned to any ethnic, religious or regional interests. It is the only party that is collectively owned by Nigerians.” This was an actual echo of the point previously made by the National Chairman of the party.

What does all this portend for Nigeria? It means that we are getting to the promise land of a robust and vibrant democracy. Even the emergence of submerged oppositions is good for all of us.

While this is now passé, we look forward to the other upcoming battlegrounds including Anambra 2023, Ekiti 2014, and 2015 political contest galore!

Prof Alex O. Atawa Akpodiete is Chairman of Editorial Board of Urhobo Vanguard. He is also an author, Computer Scientist, Educator, Consultant, lawyer, Political Analyst, Public affair analyst & Social commentator, with a Doctorate degree in Jurisprudence from the US. He has lectured Law, Ethics and Security & Intelligence Studies at the University level here in Nigeria and US.

He also writes for a state daily newspaper, online publications & national monthly magazine. He currently divides his time between Nigeria and USA where he runs a Global Consultancy and an international capacity-building firm ATAWA GROUP. Contact him on +1(917) 972-2034 or +234(0)8138391661 or [email protected] He is also on Facebook, LinkedIn and Twitter.