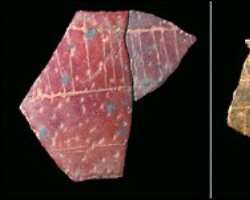 By Jonathan Amos
Science correspondent, BBC News
http://www.nigerianbestforum.com/blog/wp-content/uploads/2010/03/47399066_top.jpg Inscribed ostrich shell fragments found in South Africa are among the earliest examples of the use of symbolism by modern humans, scientists say.

The etched shells from Diepkloof Rock Shelter in Western Cape have been dated to about 60,000 years ago.

Details are reported in the Proceedings of the National Academy of Sciences.

The researchers, who have investigated the material since 1999, argue that the markings are almost certainly a form of messaging – of graphic communication.

“The motif is two parallel lines, which we suppose were circular, but we do not have a complete refit of the eggs,” explained Dr Pierre-Jean Texier from the University of Bordeaux, Talence, France.


“The lines are crossed at right angles or oblique angles by hatching. By the repetition of this motif, early humans were trying to communicate something. Perhaps they were trying to express the identity of the individual or the group,” he told BBC News.

Symbolic thought – the ability to let one thing represent another – was a giant leap in human evolution, and sets our species apart from the rest of the animal world.

Understanding when and where this behaviour first emerged is a key quest for scientists studying human origins.

Arguably the earliest examples of conceptual thought are the pieces of shell jewellery discovered at Skhul Cave in Israel and from Oued Djebbana in Algeria. These artefacts are 90,000-100,000 years old.

Shell beading from 75,000 years ago is also found at Blombos Cave in South Africa, as well as a number of ochre blocks that have engravings not dissimilar to those at Diepkloof.


Etched ochre blocks from Blombos
However, the significance of the Diepkloof finds may lie in their number, which proves such markings could not have been simple doodlings.

“What is extraordinary at Diepkloof is that we have close to 300 pieces of such engravings, which is why we are speaking of a system of symbolic representation,” Dr Texier said.

The team, which includes Dr Guillaume Porraz from the University of Tubingen, tried themselves to recreate the markings using pieces of flint.

“Ostrich egg shells are quite hard. Doing such engravings is not so easy. You have to pass through the outer layer to get through the middle layer,” Dr Texier explained.

The team's experiments also suggest that the colouration of the fragments is natural and not the result of the application of pigments.

The group was able to reproduce similar hues by baking pieces of shell near a fire.


Early humans pierced and strung shells together as jewellery

“Here we've got something that we can compare with later material that clearly does have important signalling value in the populations,” he told BBC News.

“It's a very nice link between the Middle Stone Age, the later Stone Age and even recent population in South Africa. One question now is whether this is a special site, or as we excavate more sites will we find this material is more widespread?”