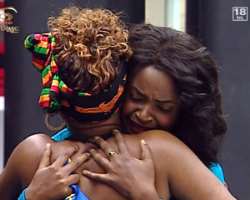 
After expressing her desires to be the first woman to win the Big Brother grand prize since Zambia's Cherise did so seven seasons ago, Dillish has done it for all of Africa's women!

The gorgeous Namibian started her Chase race as the proverbial underdog and was labeled everything from lazy to a pampered princess. As the Chase rolled on however, Dillish quickly emerged as a very strong contender for the Chase title and won her fellow Housemates and Africa over, with her quirky, accented alter ego, aptly titled Princess Dillish.


Dillish hugs Cleo in happy tears…
The Namibian made sure to stay away from trouble and coasted through the Chase by taking her place behind the scenes. While her fellow Housemates got themselves into hot water, fighting and gossiping their way to what they hoped was the top of the mountain, Dillish remained grounded and maintained cordial relations with her fellow Housemates.

The only time the Namibian got herself in a spot of trouble was when she and her good friend, Nigeria's Melvin, had a disagreement after she told her fellow Housemates about a relationship he was involved in, which was less than stellar. Dillish and Cleo proved to all and sundry that women are indeed a force of nature. The two hotties pipped their male counterparts, Elikem and Melvin to the Top 2 while, as well as their close friend Beverly.

Before the big news was delivered, Pebbles the fish surprised all and sundry with one last speech. 'On behalf of myself and the other fish, I would like to congratulate you on your amazing feat. You are the specialest ladies in Africa,' Pebbles said.

However, one thing is clear! Tonight is Dillish's night and oh whata moment it was! As soon as the Namibian was announced the winner of the Chase, the Namibian broke down in a heap of tears at the realisation that she has a cool USD 300 000 sitting in her bank account. Yes Africa. She came, she saw and she conquered. In heels even!