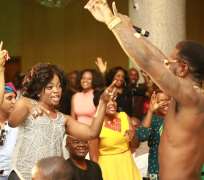 Funke blew into fame in her self-produced movie, Jenifa only a few years ago and she has become a household name since then. On the part of Osita, the 2003 Aki Na Ukwa movie brought him into stardom and has remained stronged afterwards. ''Fashola deported people who were constituting a nuisance'' - Jide Kosoko

Actress Chioma Toplis To Femi Fani-Kayode: I'M LAUGHING OUT LOUD AT YOUR STUPIDTY