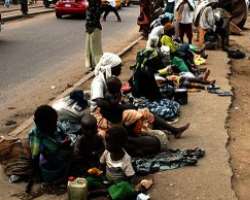 
The National Vice President of the Nigerian Labour Congress, Issa Aremu has described the deportation of destitute from Lagos state by the government as a war against the poor.

He also called on government at all levels to create jobs to mitigate the horrifying state of destitution in the country.

The Pan-Igbo Cultural Organisation, Ohaneze Ndigbo, has also condemned the action of Lagos State Government, describing it as unconstitutional.

Addressing newsmen in Anambra State, chairman of Ohaneze Ndigbo, Anambra State chapter, Elder Chris Eluemuno, said the action of the Lagos State government was not only callous, but a clear violation of Nigeria constitution, which guarantees every Nigerian the right to reside and work in any part of the country.

The labour leader also challenged members of the National Assembly to drastically reduce their salaries which he described as insensitive to the plight of Nigerians.

The occasion was the national workshop by the women workers under the aegis of National Union of Textile, Garment and Tailoring Workers of Nigeria held at Michael Imoudu Institute of Labour Studies, Ilorin.

Mr.Aremu, while delivering his keynote address took a swipe at the Lagos state government for deporting destitute to their states of origin.

The act he noted is tantamount to deporting Nigerians from their country blaming the influx of destitute on bad governance.

He wondered why a rich country like Nigeria could still have destitute urging the state governments to liaise with the federal government to find a lasting solution to the crisis and nab smuggling instead of impoverishing ordinary Nigerians.

Eluemuno on his part  said what the Lagos State government did was inhuman and barbaric, aimed at insulting and embarrassing the Igbo race.

He said Ohaneze Ndigbo totally rejected the explanation put forward by the Lagos State government in defense of its action that the deportees were returned home for proper integration, and wondered if dumping and abandoning them under the bridge in Onitsha at midnight was the best way to return them to their homes for proper integration.

The Ohaneze chairman raised some questions, which he demanded the Lagos State government to answer, including 'to whom were the deportees handed over?,

Why were non-Anambra indigenes among those also dumped and abandoned at Onitsha, why were they not taken to their respective home states? Have all the destitute and criminals that roam the streets of Lagos been returned to their home states for proper integration, why single out Ndigbo?'

He said that the Igbo race and the good people of Anambra State demanded an unreserved apology from the Lagos State government, else it would be taken that its action was a calculated insult aimed at creating unnecessary friction between the Yoruba and Igbo who had been living and working peacefully in Lagos for decades.

According to him,  Igbos have contributed immensely to the development of Lagos State, warning that such an unhealthy development by the Lagos State government would not augur well for the unity of the community.

Ohaneze Ndigbo also condemned the role of the police in the deportation for escorting the vehicle that brought the deportees down to Onitsha from Lagos.

Accoding to him, 'what a travesty of justice that security agents who are paid from public fund to protect the rights of citizens, were used to perpetuate the violation of the constitution they all swore to defend and protect.

'We urge the Inspector General of Police (IGP) to investigate the role of his men in this despicable and illegal action of the Lagos State government.'

The apex Igbo cultural organisation commended what it described at the mature and peaceful manner the Anambra State governor, Mr Peter Obi, had handled the deportation issue.

He said 'We strongly support all the steps he has so far taken to seek reduess for the wicked and degrading treatment meted out to our people.

'We appeal to the good people of Anambra State especially those in Lagos, to remain calm, law abiding and go about their businesses without fear of molestation.

Aremu also condemned what he described as bogus salary being earned by members of the national assembly explaining that it is the second highest in the world.

While 70 per cent of Nigerians live below poverty line, the emoluments of the 449 members of the national assembly does not commiserate with their productivity as most of them cannot justify the pay.

While describing the salary as wage theft, he asked for drastic reduction of the salary before Nigerians revolt against them.