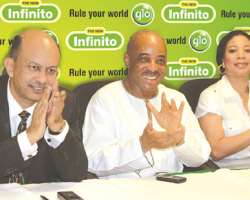 
Leading telecommunications company, Globacom, has enjoined the Super Eagles to ensure victory over Bafana Bafana of South Africa as they meet in the Mandela Challenge billed for the Moses Mabhida Stadium, Durban on Wednesday.

The high profile encounter has been generally regarded as a friendly between both nations in honour of former South African President, Dr. Nelson Mandela. But players from both sides have talked tough ahead of the tie.

Globacom in a statement in Lagos on Monday stated that national pride will be at stake in the game, adding that the Super Eagles cannot afford to take the match for granted.

'Even though, it is a friendly match, we want the Super Eagles to note that national pride is   at stake in the game and they should go for total victory,' Globacom stated.

According to the telecoms network, the match will also serve as a veritable tune-up for the Eagles ahead of the crucial World Cup qualifier with Malawi in September.

Globacom expressed satisfaction with the decision of the Eagles' technical crew to exploit the Durban game to launch fresh players into the squad, saying it would engender the competition required to take the national team to the desired height.

'We appreciate the building process as we believe that it will make the squad even more formidable,' the statement further said.