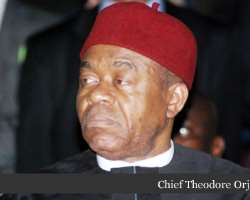 
The new transition committee chairman of Aba North LGA, Mr. Chizuru Kelechi Kanu has been sworn- in with a charge to sanitize the local government and ensure payment of staff salaries.

Speaking during the swearing-in ceremony at the Executive council Chamber, Government House, Umuahia the governor said the TC Chairman was chosen because of what he can do.

He recalled that the Aba North LGA owed the highest salary and stated that his government does not want a repeat of the ugly past.

He charged the TC chairman to follow the state government's focus in governance and confront the decadence in the local government fearlessly.

He urged the new TC chairman to leave his name on the sands of time and warned that he will sack him if he fails to deliver.

Responding, the new transition chairman of Aba North, Chizuru Kelechi Kanu thanked the governor for the opportunity to serve his people promised to justify the confidence reposed in him.