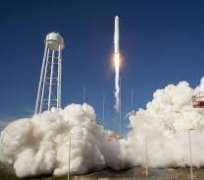 
Lebanon's army launched a search operation on Friday, hours after two rockets fired from an unknown location exploded metres outside the presidential palace, the military said.

The attack came amid high tensions in Lebanon, fanned by the conflict in neighbouring Syria, now in its third year.

'After the explosions… in the area of Yarzeh (in Baabda east of Beirut), the army has launched a search operation in the area,' the army said.

The military said the explosions were caused by 'two 107 mm rockets', and that it is 'carrying out a search operation in the areas from which (they) might have been launched.'

An AFP photographer at the scene said one of the two rockets struck some 100 metres (yards) from the presidential palace in Baabda, a high-security area that is also home to several embassies.

President Michel Sleiman appealed for calm.
'However many rocket messages are sent to us, no one can change the foundations of our patriotism, or our belief in freedom and truth,' Sleiman said in a statement.

'Our belief in national unity (will) push away from our country the impact of what is happening around us in the region,' the president added, in a reference to Syria.

Although Lebanon is officially neutral in Syria's war, the small Mediterranean country is split over the revolt against President Bashar al-Assad.

The powerful Shiite movement Hezbollah has openly sent fighters to battle alongside the Syrian regime against rebels trying to overthrow Assad.

But many Sunnis back the Sunni-led Syrian opposition.

In June, a Grad rocket fired from north of Beirut exploded near the city, and the army found a second rocket at the launch site.

A month earlier, two rockets hit Hezbollah's heartland in Beirut shortly after the group's leader made a speech defending the movement's involvement in Syria.

Damascus dominated Lebanon for nearly 30 years, until an international outcry over the assassination of former prime minister Rafik Hariri forced the Syrian army to withdraw its troops.

Syria still exerts significant influence in Lebanon through its allies there.