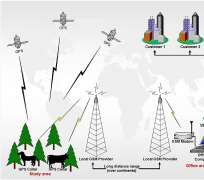 
The Borno state Government has declared that it is not interested in the restoration of GSM network services in as much as it will distablize the relative peace being enjoyed in the state.

It would be recalled that since the declaration for the state of emergency in Borno, Yobe and Adamawa, the government and the Joint Task Force (JTF) has cut off telecommunication services and cellular phones (Turaya) in the three states in their offensive raid on Boko Haram sects, only a couple of weeks ago when GSM network was restored in Adamawa and Yobe, except Borno.

The Deputy Governor, Alhaji Zanna Umar Mustapha made the declaration while receiving members of the Senate Committee on Defence, Police, Army and National Security (SCDPANS) in a courtesy call yesterday.

Mustapha commended the Committee led by its  Chairman, Senator George Sekibo for their concern on how to end the Boko Haram insurgency in the north, adding that, the committee has demonstrated a sense of nationalism for revisiting the state to assess the security situation.

The Deputy Governor said, 'We as Government and the people of Borno state want to use this opportunity to thank the SCDPANS, JTF and the vigilante youths a.k.a Civilian JTF in the fight against terrorism, all your efforts are highly commendable as we are witnessing tremendous improvement on the security challenges, the 6am to 9pm curfew has been relaxed to 11pm, and if restoration of GSM network will affect the relative peace we now enjoyed, it is better we went to Adamawa or Yobe to make calls and come back to Maiduguri'.  He stated.

Mustapha said, although recently there were some pockets of killings by suspected Boko Haram sect in Mainok village, Biu and Kukawa council areas, but government is optimistic that total peace will be restored across the state in no distant time, and therefore called on all and sundry to use the period of Ramadan Kareem to pray for peace and unity in the state.

Earlier, the Chairman and Leader of the delegation, Senator George Sekibo told Deputy Governor that they were in the state for the second time to assess the security situation, meet with security agencies and stakeholders with a view to collectively review the security challenges in the state.

He said, with what they saw on ground so far, the declaration for the state of emergency in the three states have started yielding positive result, as live is gradually picking up, and the rate of killings have drastically reduced in the state