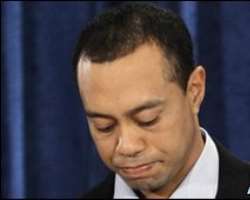 Gatorade is the latest major company to cut ties with the sportsman following Woods' admission that he was unfaithful to his wife.

The drinks company, owned by PepsiCo, had already discontinued a Tiger Woods-themed drink, Tiger Focus. It follows AT&T and Accenture in ending deals.

However, Gatorade said it would continue its partnership with the charitable Tiger Woods Foundation.

Therapy
A spokeswoman for Gatorade said: “We no longer see a role for Tiger in our marketing efforts and have ended our relationship… We wish him all the best.”

Its move comes just one week after the star made a frank public address to a select gathering at PGA Tour headquarters in Florida.

In his statement Woods apologised to his wife, friends and family, as well as to his fans.

“I was unfaithful, I had affairs and I cheated. What I did was unacceptable,” he said.

Woods, 34, told the hand-picked attendees he had spent 45 days in therapy and claimed he still had “a long way to go” to overcome his problems.

Distance
Gatorade is the third company to end its relationship with Mr Woods.

Male grooming business Gillette and luxury watchmaker Tag Heuer have also distanced themselves from him.

Carmaking giant General Motors (GM) said recently an arrangement that allowed Woods free access to its vehicles was over.

Wealthiest athlete
The world's number one golfer did have an endorsement contract with GM's Buick brand, but that ended in 2008.

Such arrangements made Tiger Woods the world's wealthiest athlete, estimated to have earned £66m ($100m) a year in endorsement deals before allegations of infidelity emerged in December of last year.

A recent University of California study suggested the total economic damage of the Tiger Woods affair to all involved parties could amount to as much as $12bn.

But sports equipment giant Nike, which pays Woods a reported $40m a year, has given its support.

And video game maker Electronic Arts is to go ahead with plans to roll out an online game featuring the golfer.