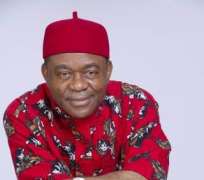 Abia State Governor, Chief T.A. Orji has commended the Super Eagles for qualifying for the finals of the 2014 African nations championship at the expense of hard fighting Elephants of Cote D' Ivoire.

Speaking through his chief Press Secretary, Ugochukwu Emezue, Chief Orji described the qualification of the Eagles as highly spectacular and historic.

Chief Orji who said that the Keshi- led boys have done Nigeria proud, stated that as the defending champions, it could have been disastrous if the Eagles failed to pick the final ticket.

The sports loving Governor who congratulated president Jonathan for his support for the Eagles, charged Keshi and his boys not to be carried away by the present victory, instead, they should start early preparations to defend their title in South Africa in 2014 when the event starts.

He argued that Nigeria has remained the target of other nations in the continental soccer hence the need to prepare well.