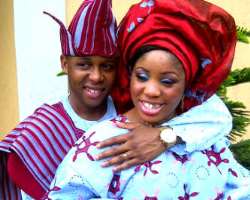 Gist reaching us indicates that Sunkanmi, who is the son of veteran comic actor, Sunday Omobolanle popularly known as Pappy Luwe, is expecting a child from his beautiful wife.

Sunkanmi, who is also an actor like his father, as we heard, is very excited about the bundle of joy coming his way. We were informed by those in the know that the actor's wife is pregnant and she is expected to put to bed soon.

Sunkanmi married in June 2011 to his longtime then girlfriend, Kudirat Bakare. As at press time, Nollywoodgists.com could not confirm this story from Sunkanmi, who didn't pick our calls put through to him.