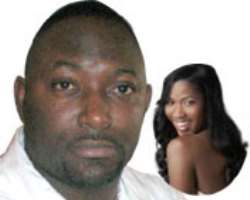 Sources say the ex-husband of star actress, Stephanie Okereke, Chikelu Iloenyosi, has remarried. The former Super Eagles defender finally walked down the aisle with another lady after his celebrated marriage to the sexy ex-beauty queen turned actress packed up three years after they tied the knot.

The marriage is said to have produced two children, the family, as we were further informed, now lives in Abuja, Nigeria's capital city.

Iloenyosi got married to Stephanie in 2004 and it crashed in 2007. The actress remarried in April 2012 in France to Linus Idahosa in a glamorous wedding ceremony tagged 'fairy tale', shortly after a Lagos High Court had declared her 2004 marriage to Iloenyosi null and void.