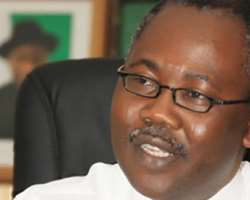 SAN FRANCISCO, July 11, (THEWILL) – Hearing in the N10.2 billion libel suit filed by the Attorney General of the Federation (AGF), Mohammed Adoke (SAN), against former lawmaker, Dino Melaye, which had earlier been scheduled for Thursday, has been adjourned to October 3.

Justice Olasumbo Goodluck of an Abuja High Court adjourned hearing in the matter, Thursday, after the defence told her that they were served with the AGF's response last Wednesday.

Defence lawyer, Bamidele Aturu, who told the court that Adoke's response to his clients' defence was served on him around 6.30pm the previous day, therefore sought an adjournment to enable him reply appropriately.

The plaintiff’s counsel, Adeola Adedipe, confirmed the late service of the AGF's response on the defendants as he also agreed to an adjournment.

Adoke had sued Melaye (a former House of Representatives member) and a group, Anti-Corruption Network, claiming N10.2billion damages for allegedly damaging his reputation in a petition they wrote to President Goodluck Jonathan.

Melaye and his group had in the petition dated April 11 , detailed alleged graft and "outrageous use of powers against public interest" by the AGF; allegations the Presidency had since ordered to be investigated.

Melaye and his group, in their defence, however queried the professional competence and integrity of the AGF.

They also raised allegations bothering on corruption and abuse of office.

Melaye and his group stated that the nation's anti-corruption agencies - Independent Corrupt Practices and Other Related Offences Commission (ICPC) and Economic and Financial Crimes Commission (EFCC) have had cause to clash with Adoke over his moves to "castrate and frustrate them from investigating and prosecuting corruption and other economic and financial crimes in Nigeria.

"The plaintiff made Nigerians to believe that the Federal Government acted legally in facilitating the disputes involving OPL 245 allocated to Malabu Oil and Gas Limited owned by Chief Dan Etete when he knew or ought to know that: Chief Dan Etete was the Minister of Petroleum Resources on April 29, 1998 when his company, Malabu Oil and Gas Limited, was allocated OPL 245 by General Sani Abacha the then military Head of State contrary to section 10 of the Code of Conduct Bureau and Tribunal Act (Cap 56) Laws of the Federation of Nigeria, 1990 applicable at the material time.

*The oil block was cancelled and forfeited by the Federal Government under President Olusegun Obasanjo on July 2, 2011 which allocated same to Shell for 30 years leading to the institution of the suits filed by Malabu Oil and Gas Limited.

*The settlement sum of $1.1 billion was paid into depository Escrow Account No: 41454193 domiciled in JP Morgan Chase Co., London belonging to the Government of the Federation in line with section 162 of the Constitution.

*The said of sum $1.1 billion was withdrawn from the Account of the Government of the Federation without any appropriation by the National Assembly as required by section 59 of the Constitution.

*The purported amicable resolution of the disputes over the ownership of OPL 245 which culminated in the surrender of the oil block to Shell and ENI contravened the Federal Government Regulation of not selling more than 40 per cent shares in any oil block to foreign oil firms.

"Owing to the allegations of fraud, round tripping, corruption and abuse of office in the fraudulent settlement of the disputes involving the ownership of OPL 245, the House of Representatives passed a resolution to investigate the deal. When the Committee was set up the Plaintiff appeared before it to give testimony he justified the illegal and fraudulent transaction.

"Although the Committee has not submitted its report for the consideration of the House, the Plaintiff lied when he wrote to Global Witness, an anti-corruption agency based in the United Kingdom, that the House of Representatives had approved the Malabu Oil deal," the defendants stated.

Adoke , in a recent response on July 10, however described the allegations contained in the defendants' defence as "being embarrassing, scandalous, vexatious, disclosing no defence to the action and an abuse of the process of the court,” as he urged the court to strike out a substantial part of it.