Are there any “crookbackts”, dumb or other blemished people in your “church”? (Part 2 of 2) 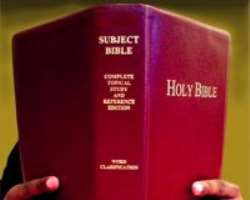 Melchizedek, we are told, is the king of SalemSalem not being the name of any known place, but of a title meaning, Peace, to wit King of Peace (cf. Hebrews 7:2)and also the priest of the Most High One, who had a special encounter with Abraham.

Being the priest established by Elohim thus makes Melchizedek His permanent representative. Of course, this representation is before men living on earth. By this fact alone, Melchizedek is not the same as or co-equal with Elohim, as some teachers of falsehood would have salvation seekers believeMelchizedek is the sole link or go between man and the Most High One.

The scriptures of Genesis say Melchizedek made a reception for Abraham and his victorious army at which he served bread and wine, just before they reentered Sodom, after defeating in battle, a coalition force of four kings led by Chedorlaomer.

This coalition force had earlier on, upon winning a war against the king of Sodom, taken Abraham's brother's son, Lot, who at the time lived in Sodom, together with many others, captive (cf. Genesis 14:8-16); and Abraham went to battle to rescue Lot out of the power of these kings.

At this reception, Melchizedek, acting as the priest of the Most High One to deliver His special message to Abraham, pronounced the blessings of Elohim upon him. Thereafter, Abraham, as if in response to a toast of friendship, performed an act of worship in willingly and joyfully giving Melchizedek tithes of the very huge booty he gained from the war against the forces of Chedorlaomer.

Further details in the scriptures about Melchizedek can be found in Psalm 110:4. Here, Elohim is recorded to have sworn to David that, He would establish an everlasting priesthood after the order of Melchizedek unto his Lord. The Scriptures reveal this Lord of David to be Yeshua, the Messiah (Hebrews 6:20).

These verses speak on the untold beginning and parentage of high-priest Melchizedek and also reveal him to be Yeshua, the only begotten Son of Elohim, who despite this son-ship is so humble in taking upon himself the appearance of man in order to become mankind's priest-redeemer.

Melchizedek's kingly status, mentioned in Genesis, is restated in some of these verses of Hebrews. Here, his ordination by Elohim to receive tithes directly from true worshippers of the Most High One under the New Testament is also revealed.

From these revelations of Genesis 14, Psalms 104 and Hebrews 5, 6 and 7, we find out that Melchizedek is indeed a king and a priest whose priesthood is ordained by Elohim to be in force throughout all times of man's existence on earth. His beginning is known by only Elohim; he being His only begotten SonYeshuathe first and forever reigning King, Prophet and Priest.

In the current era of the New Testament, in order to assist MelchizedekYeshuain his high-priesthood work ordained by Elohim for him, the Most High One calls men, removes from their spirits and bodies the power to commit sin in the cleansing-waters of baptism in living waters (Ezekiel 36:25-27, Acts 2:38, First John 3:9), and also takes away from their bodies any destructive consequences of sin that hitherto came upon all men as a result of the sin of the first Adam, thereby turning them into new creatures (Second Corinthians 5:17), and hands them to Yeshua for this purpose.

Because of the importance of the work of all priests under Melchizedek, the choice of men for enrollment into this service is neither made by Melchizedek himself, nor by anyone desirous of being used thus, but by Elohim alone.

Once the choice of Elohim is made and His calling responded to by any man, that man is then given to Yeshua to be cleansed and remade, and then joined to his (Yeshua) own pure and perfect bodythe True Vine (John 15:5)as a branch.

Once the born again person gains access to the perfect life of Yeshua in being grafted to the True Vine as a branch, he is further groomed to have every spot, wrinkle and blemish in him removed (Ephesians 5:27) as he partakes of the life-giving sap of the vine.

In the course of time, while actively living in this established relationship between the True Vine and the branch, the Elohim-ordained and anointed priest of Melchizedek becomes as identical as Yeshua is, having his full stature (Ephesians 4:13), since he has free access to all what Yeshua has.

In fact, he becomes one with Yeshua in bones, flesh and blood (Ephesians 5:30). Consequently, the life that this priest of Melchizedek now lives, he does not live of himself, but Yeshua dwelling in him, lives in and through him (Galatians 2:20).

Fantastic as this attained status of all priests of Melchizedek may be, the ease, simplicity, and ordinariness of how to come into it, is, for me, even more fantastic: Anyone born again of water and of the Holy Spirit (John 3:5) automatically and immediately gets to be ordained and anointed by Elohim as a priest of Melchizedek!

For anyone born of water and the Holy Spirit, the scriptures in First Peter 2:5, 9-10 immediately become real or fulfilled in his life: please read and meditate on these scriptures to be assured of this. All born again persons, therefore, are people who are accepted and chosen by Elohim to become priests in the order of Melchizedek, and anointed to offer spiritual sacrifices, for and on behalf of menFirst Peter 2:5.

So then, whoever or whatever manner of man the priesthood of Aar'on did not permit to offer sacrifices on behalf of men to Elohim, in that he had a blemish, such same men are not permitted in the holier and more perfect priesthood of the order of Melchizedek.

Since every born again people are priests of the high-priesthood of Yeshua, it can not be that there can ever be anyone genuinely born of water and of the Holy Spirit, who would have a blemish of any kind.

If any blemished person's body must be inhabited by Yeshua, it has to be completely healed, cleansed, and delivered of every manner of disability before being worthy of His co-habitation. And so, every body with blemish must be miraculously healed by the name and word of Yeshua and or recreated in the name of Elohim and of His Son, Yeshua, in his born again experience, before being deemed worthy for membership to the Body of YeshuaThe True Church.

We must remember that The True Church (The Body of Yeshua) is a spiritual body of people who are blessed to be called out of the world by Elohim, delivered of all disabilities, recreated and redeemed with, in, and by the blood of The Lamb of Elohim in being washed in the waters of baptism.

This state of blessing is what my friend, the motivational speaker I encountered at the Great Hall of the University of Ghana, Legon, in August 2008, should have ensured was true of all the people in his 'church' who he claimed to have led into the born again experience, if he was indeed a true minister or priest under the high-priesthood of Melchizedek.

If there be any 'church', no matter what name identifies iteven when tagged 'The Church of Christ'with segregated congregations of people who can hear normally, and those that are deaf and dumb whose mode of being ministered to is only in sign language, then, this 'church' can not be the True Church or the Body of Yeshua.

It is not a name that makes a congregation The Church of Yeshua, but the full powers of Elohim and of His Son, Yeshua, that are alive, active, rule and clearly manifest in that congregation. And no such congregation can have within it, any blemished peopleof 'crookbackts', dumb, deaf, blind, cripples, etc.

When men call themselves or are called by their fellow men into a so-called pastoral work, the people they lead will never experience the power of the Most High One in their livesthey will at best live as tares that seem to be wheat.

While Yeshua was at work during his earthly sojourn, he healed cripples, blind, deaf, dumb, paralytics, etc, by his word and or bare hands. He even healed, at a good distance away from those needing deliverance: And now in the era of grace he would be living in close contact with people who cannot be healed? How could that be if indeed he resides in such bodies?

The false assurance given to salvation seekers that they become born again or saved, and are become members of the Body of Yeshua in their sincere recitals of so-called special prayers is the cause of this state in a 'church' which habors 'crookbackts', cripples, deaf, dumb, blind, and all manner of blemished people. May all salvation seekers beware of this! Shalom.

The writer is a Bible-expositor and author of the book: Beware of This False Doctrine: Of Reciting the Sinners' Prayer for salvation, published in Ghana and the USA. His e-mail address: [email protected]

Disclaimer: "The views/contents expressed in this article are the sole responsibility of the author(s) and do not necessarily reflect those of The Nigerian Voice. The Nigerian Voice will not be responsible or liable for any inaccurate or incorrect statements contained in this article."
Articles by Chris Bapuohyele
5-7-2013  Are There Any “crookbackts”, Dumb Or Other Blemished People In Your “church”? (part 1 Of 2)