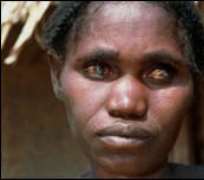 ATLANTA---The Carter Center announced today that it will no longer only control river blindness, but instead it will work with ministries of health to eliminate it in all 10 countries in Africa and Latin America in the areas where the Center fights the neglected disease. Spread by the bites of black flies that breed in rapidly flowing streams, river blindness (onchocerciasis) is a dreadful eye and skin disease affecting millions of the poorest people around the world.

'River blindness can and should be eliminated, not just controlled, even in the most afflicted areas of Africa,'said former U.S. President Jimmy Carter. 'The Carter Center is taking on the challenge of eliminating river blindness in Africa and Latin America because we know immense suffering can be prevented if we apply both science and political will to this goal.'

The decision builds on the Center's strong partnerships with the ministries of health and historic successes against the parasite in the Americas, Uganda, and Sudan. With assistance from The Carter Center, last year Sudan and Uganda announced they had interrupted river blindness transmission in key endemic areas, and in the Americas, four of six countries have broken transmission of the disease nationwide.

Together with the national programs, the Center's comprehensive river blindness elimination strategy now includes Africa's most populous and highly endemic countries, Nigeria and Ethiopia. The Center has supported river blindness control in the two countries since 1996 and 2000, respectively.

Until recently, the widely held belief in scientific communities has been that river blindness could not be eliminated with drugs and health education alone in Africa, in part, due to its high prevalence and the challenges to delivering health services.

The majority of river blindness occurs in Africa, where more than 120 million people are at risk and hundreds of thousands have been blinded by the condition. The disease can be prevented by community-delivered, mass treatments using the safe and effective oral drug Mectizan®, donated by Merck.

Moving from control to elimination is a turning point in the Center's river blindness strategy, requiring that intervention efforts intensify to wipe out the disease once and for all. Unlike in a control program, in an elimination program, success will mean that the countries' precious health resources can be freed and reallocated to fight other diseases. The Center officially added the word elimination to its program name to reflect the new focus of its intervention efforts.

The Carter Center will enhance elimination efforts by assisting the ministries of health to increase distribution of Mectizan, moving from once-a-year to twice-a-year treatments in some areas, and starting drug distribution in previously untreated areas.

'Elimination means that the disease's chain of transmission has been broken once and for all. Our experience shows that this strategic shift could permanently protect 21 million people and their descendants in Africa from this horrible parasitic worm in areas currently assisted by The Carter Center,' said Dr. Frank Richards, Carter Center River Blindness Elimination Program director.

The Carter Center-assisted activities have reduced disease, improved lives, and spearheaded international dialogue on the possibility of wiping out river blindness permanently.

'Together with the national programs, the Center is now taking the next step to demonstrate the feasibility of river blindness elimination in the world's most endemic countries,' said Dr. Richards.

Less than one percent of the global burden of river blindness remains in Latin America, which has served as inspiration for this new elimination goal in Africa. A Center-led coalition has reduced the population requiring Mectizan treatments in the Americas by 95 percent, and interrupted river blindness transmission from all but one location, a hard-to-reach area in the Amazon rainforest on the Venezuela-Brazil border. Four formerly endemic countries in the Americas have wiped out river blindness and are in various stages of the elimination verification process.

Since absorbing the River Blindness Foundation in 1996, The Carter Center has assisted the ministries of health of Brazil, Colombia, Ecuador, Guatemala, Mexico, and Venezuela via the Center's Onchocerciasis Elimination Program of the Americas (OEPA). In Africa, the Center currently assists Ethiopia, Nigeria, Sudan, and Uganda. At the end of 2012, The Carter Center had assisted in the delivery of approximately 172 million cumulative Mectizan treatments through community-based channels, as well as improved health education, surveillance and data management, and trainingof community-based health workers.

Beginning with the Center's leadership of the international Guinea worm eradication campaign since 1986, which has reduced cases by more than 99 percent, the Center has pioneered neglected disease eradication and elimination by targeting lymphatic filariasis, blinding trachoma, malaria (island of Hispaniola), and river blindness for several years. The International Task Force for Disease Eradication is housed at The Carter Center and chaired by Carter Center Vice President for Health Programs Dr. Donald Hopkins.

The Center uses evidence-based practices to carefully evaluate whether its interventions are significantly reducing the burden of disease.In conjunction with ministries of health and other partner organizations, The Carter Center conducts rigorous annual peer reviews and evaluations of its six infectious disease health programs. The reviews typically take place in Atlanta at The Carter Center.

The engagement of a wide range of partners remains critical to the elimination of river blindness in Africa and Latin America, including the communities and the individual countries' national programs. Donors and partners of the Carter Center's River Blindness Program have included Merck and its Mectizan Donation Program; the World Health Organization (WHO) including the Pan American Health Organization (PAHO) and the WHO-World Bank African Programme for Onchocerciasis Control (APOC); the Bill & Melinda Gates Foundation; the Lions Clubs International Foundation; the U.S. Agency for International Development (USAID); RTI International; the U.S. Centers for Disease Control and Prevention; Mr. John J. Moores; the former River Blindness Foundation; the Kingdom of Saudi Arabia; the Alwaleed Bin Talal Foundation; BASF; the Mohamed S. Farsi Foundation; the OPEC Fund for International Development; and many other generous donors and partners.