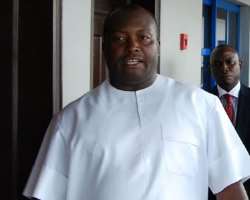 The protesters, operating under the aegies of Joint National Association of Persons With Disabilities (JONAPWD), Delta State chapter, had barricaded the Asaba-Benin expressway as early as 11am, thereby causing a heavy gridlock which stretched to the Onitsha Head Bridge.

The physically-challenged persons were protesting what they called discrimination, unfair treatment as well as exclusion from the Subsidy Reinvestment Programme(SURE-P) Fund of the Federal Government.

Taking over the main highway, they succeeded in bringing to a halt all vehicular movement on the road, thus trapping lots of important personalities in the gridlock.

Uba, who was caught up in the gridlock,among many others, had thought of buying out his way as he offered the protesters a N20 million cheque to allow him pass.

But the physically-challenged persons, who were afraid that Uba might be playing a fast one on them, immediately turned down the offer as they stood their ground.

Efforts by the Secretary to the Delta State Government (SSG), Comrade Ovouzorie Macaulay, as well as the Special Assistant to the governor on Disability to pacify the protesters, were said to have been rebuffed as they demanded that not until the state governor personally comes out to address them, they wouldn't move away from the highway.

The physically-challenged who were mainly boys, girls and women decried the insensitivity of Governor Emmanuel Uduaghan to their plight.

They also demanded for 5 percent of SURE-P fund from the Federal, State and Local Governments.

"We need our own commission, we need our medical health care in government hospitals, we need social welfare and security, we need free accessible transport, we need economic empowerment",

Similar protest took place at Ughelli North Local Government Council of the state few days ago when the Ughelli North chapter of the group shut down the council what they described as neglect of the council’s Transition Committee Chairman, Chief Friday Akpoyibo, towards their plights.

Chairman of Ughelli North Local Government Area chapter of the association, Comrade Ernest Igbuzor, had alleged that the council boss had been unwillingness to pay the N1.5million he earlier approved for them.

A similar protest had also taken place at the Delta State Oil Producing Area Development Commission (DESOPADEC), following the alleged embezzlement of over N40million they claimed was meant for their welfare.