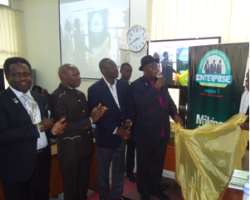 Following the recent unveiling of the eagerly awaited Entrepreneurial reality TV show 'The Enterprise', there has been consensus among stakeholders and keen observers that the event will be a huge success.

President of Port Harcourt Chamber of Commerce, Engr. Emeka Unachukwu, Former Governor of old Rivers state and Amanyanabo of Twon Brass, HM King Alfred Diette Spiff, and the General Manager Nigeria Content, Shell Petroleum Development Company, Igo Weli among others have all expressed confidence over the success of the upcoming Entrepreneurial reality TV show 'The Enterprise'. There is also a consensus that the event will rival some of the globally recognized entrepreneurial realty TV shows in the world.

These assertions were made during a ceremony to mark the official unveiling of the 'ENTERPRISE REALITY SHOW' tagged the making of the next celebrated entrepreneurs, held at the council hall of Port Harcourt Chamber of Commerce earlier in the week..

PHCCIMA, President, Engr. Unachukwu in his remark underscored the importance of the entrepreneurial TV reality show stating that it is another way of opening vistas of opportunities for our budding youths. He said PHCCIMA is always open to offer support to any organization that seeks to leverage on it to achieve clearly defined and value driven set goals. He commended the initiative and assured that PHCCIA will do everything possible to ensure that the project comes out a huge success.

Igo Weli the MD local content of SPDC said Shell is one of the IOC's noted for supporting such initiative. He said the multinational oil giant is very passionate about promoting local content, adding that the Enterprise reality TV show is invaluable hence will be looked into with a view to give it the support required to let it soar and achieve its lofty objective.

Before he officially unveiled the Enterprise reality TV show, former military Governor of old Rivers state, King Diette Spiff who had the honour of presiding over the unveiling observed that the state is full of hidden potentials waiting to be discovered. He expressed confidence that opportunities like the Enterprise reality TV show will afford youths the opportunity to showcase the stuff they are made of and the strength of their inventiveness. He thanked the President of the chamber for buying into this project and offering them the leverage needed to succeed.

The Entrepreneurial reality TV show tagged THE ENTERPRISE is put together by, the Enterprise Reality Concept; a business and human capital development organization based in the city of Port Harcourt in partnership with Port Harcourt Chambers Of Commerce, Industry, Mines and Agriculture (PHCCIMA).

Speaking to newsmen the Co- director of THE ENTERPRISE, Mr. Justice G. Kalio said the entrepreneurial reality TV show is a youth entrepreneurial training, empowerment and business idea reality TV series targeting young and enterprising people in Nigeria. According to him, 'THE ENTERPRISE is an annual event aimed at discovering Nigeria's future business leaders, it also aims to support and challenge them to build capacities by assisting them to setup and run businesses that will positively improve the socio-economic status of Nigeria' he said.

THE ENTERPRISE is scheduled to run regionally, but will be aired nationally. The first season is to take off from 2013 in Niger Delta, and will be hosted in Port Harcourt city. Subsequently, other cities in other regions in Nigeria will follow.

Each Season of THE ENTERPRISE will run for about seven months, involving Adverts, Registration, Audition, Capacity Building, Airing and Closing Ceremony. The Project will accept application from Nigerians. Each Season will involve five teams, and each team will consist of three individuals selected from series of auditions. The teams will undergo capacity building in leadership and core business ideology, marketing strategy, customer service and financial control. At the end of the capacity building each team will then present group business idea, consequently; subjecting it to a test to prove its viability through a contest. Assessment of each team will be based on viewers' votes, a panel of judges and a set of business angels. A ceremony will be organized at the end of the Season to give awards and prizes to deserving participants and partners. To sustain the Project, at the end of each Season, the Five Teams will be empowered, mentored and exposed through internships for a period of at least one year in order to strengthen their business management techniques.