Amaechi is plotting to be Tinubu of Rivers State -Wike 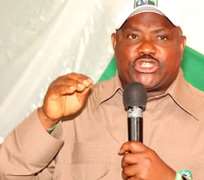 
The political crisis in Rivers State is festering because Governor Chibuike Rotimi Amaechi is working towards emerging as Bola Tinubu of Rivers State, dictating who wins an elective office or gets appointment.

This disclosure was made by the Minister of State for Education, Barr. Ezenwo Nyesom  Wike who said that Peoples Democratic Party, PDP, stakeholders in Rivers State took a decision never to allow such a one-man political godfather take over the state.

Wike who spoke at an interview session in Abuja declared that Governor Amaechi was funding opposition parties in Rivers State and was fully hob-nobing with the leaders of the yet to be registered All Progressive Congress, APC.

“Amaechi says he wants to be the Tinubu of Rivers State. He has been planning a situation where he will plant a governor in 2015 and stand aside controlling the governor. He wants to determine who holds this elective position and that appointive position. And the members and stakeholders of Rivers PDP have rejected such.

“Amaechi is threatening that he wants to defect to another party. What is he waiting for? He is already working with the opposition. But, we have one assurance for him, the PDP is waiting for him at the polls in 2015″.

The Minister said that the PDP in Rivers State is a movement that is working with all the interests of the Rivers people, hence no other political party, no matter where its schemes are hatched can withstand the PDP.

He noted that Amaechi has resorted to propaganda and paying groups and chiefs to pay him solidarity visits because of his waning popularity anf undemocratic leadership style.

According to him: “When a government resorts to expending huge resources on solidarity visits, then you know that government has lost touch with the people”.

Wike pointed out that Governor Amaechi’s grouse with the Rivers State Police Commissioner was the refusal of the police chief to be used to frame up and illegally prosecute the governor’s political opponents.

Commenting on the false reports planted by the Rivers State government on the airport reception for President Jonathan, Wike said that Amaechi had planned to embarrass the president, when he brought four commissioners and council chairmen to receive the national leader of the PDP.

He said the governor was stunned at the mammoth crowd of PDP supporters who came to honour the president. He said the previous day (friday), Amaechi was with his APC friends in Lagos while president Jonathan passed through the airport to Bayelsa.

The minister said that genuine PDP members would never allow Governor Amaechi slight the president in Rivers State. He said that it was with the annoyance that Amaechi went to OCJ Okocha’s birthday to heap insults on him.

On Amaechi’s statement that he (Wike) was too small, Wike said that Amaechi is consumed by the arrogance of power to the extent that he slights the president, berates his colleague governors and political elders.

He said that whilst he led the campaign for the restoration of Amaechi’s mandate in 2007, Amaechi called him at least ten times everyday. He also said that during the 2011 election, Amaechi was all over him all through that election, while he served as Amaechi’s re-election  director  general and election agent.

He said in 2007, despite all the financial entreaties and death threats, he sacrificed all to ensure Amaechi got his mandate back. He said that in several public appearances in churches, Amaechi declared him a man of integrity and character. He said his sudden change is a fallout of their political differences.

The minister said that Rivers State politial leaders and masses are supportive of President Jonathan and would not be swayed away by Amaechi.

He said that he at no time betrayed Amaechi, but pointed out that Amaechi betrayed him, by nominating him for ministerial appointment and instigating an advserse security report to ensure he was dropped.

Wike added that Amaechi also established a machinery to emasculate him politically in River State and his local council as part of his treacherous plots.