THE COUNTRY OF LAUGHTER AND FORGETTING 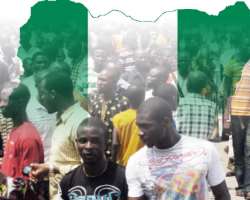 Many lovers of contemporary fiction would quickly recognize that my title is a nod to Milan Kundera’s intriguing novel, The Book of Laughter and Forgetting. In Kundera’s title I have found something of a perfect handle for what I suggest is a particular Nigerian fact: the tendency to laugh harder as life proves direr, and the haste to forget what most deserves to be remembered. We laugh so easily – and so spiritedly – because we have found the strange magic of forgetting how twisted out of shape our country is. For Nigerians, amnesia (or even willed forgetfulness) is a hope, a shield, a panacea and a disease all rolled into one.

Some years ago, Abdulkareem Adisa, a retired Nigerian general, provided an anecdote that was as fitting an illustration of the matter as any. By way of background: in the days of the Ibrahim Babangida dictatorship, Mr. Adisa presided as a military governor of Oyo State. Then, under the regime of the bespectacled General Sani Abacha, Mr. Adisa’s profile rose, not so much in affect as in notoriety. He became Nigeria’s Minister of Works and a self-aggrandizing member of the powerful inner circle of the Abacha despotism. His ministerial tenure was marked by what some critics regarded as an era of inflated contracts, mediocre work, and abandoned projects. Nobody could fairly accuse him, for example, of rising to the challenge of maintaining the country’s highways much less overseeing the building of new, durable ones.

If Mr. Adisa exhibited mastery in any sector at all, it was in the sheer accumulation of wealth. By the time he left office, swept away by the gale of a disesteeming melodrama, he’d become a preening, self-satisfied man of means. Yet, all that wealth did not spare him the humiliation of a ridiculous fall from grace, if men like him could ever be said to be possessed of grace. He was named in an apparently phantom plot to overthrow Mr. Abacha, his erstwhile pal and benefactor. The regime, which seemingly orchestrated the plot in order to test the loyalty of some insiders, let it be known that Mr. Adisa – once summoned by Mr. Abacha and confronted with evidence of his disloyalty – had buckled, hastened to his knees, and let out a torrent of tears and wails in a ludicrous gesture of contrition.

Had Mr. Abacha not died quite suddenly, as the absurd drama of the so-called coup had yet to reach its finale, many believed that Mr. Adisa and his cast of “disloyal” cohorts, would have been killed. Thanks to the dictator’s death, Mr. Adisa emerged from detention and soon after slipped into the role of kingmaker. In the prelude to the 2003 presidential election, he became one of the most visible ex-generals and government functionaries championing Mr. Babangida’s presidential ambitions. Parlaying his financial fortune into political “muscle,” he was not shy to let it be known that he was a veritable, Nigerian-made stakeholder. He was cross with reporters and Nigerians who brought up the questions of Mr. Babangida’s overwhelming unpopularity. At every turn, he underscored that it was the place of his ilk – and not really up to voters – to decide who was to rule us. In the rare moments when he remembered that there were millions of other Nigerians, it was to remind us that these millions were his – and other stakeholders’ – “people.”

Then, in an interview he gave to a Nigerian publication, Mr. Adisa offered a telling anecdote. Asked if it was true that he, a general, had reduced himself to tears before Mr. Abacha, Mr. Adisa offered no apologies. Who would feed and take care of “my people,” he asked the reporter, if he had allowed himself to get executed. When the interviewer stated that posterity would record that he became a wheedling, spineless caricature at a critical moment, Mr. Adisa reached for an easily translatable metaphor. He reminded the interview that the oyibo – white people – invented both the pencil and the eraser. The implication was clear: that the inscriptions of history were easily erasable.

Mr. Adisa was in an automobile accident in 2005, on a stretch of road he might have maintained in his ministerial days. Gravely injured, he was flown to the UK, one of the locations where Nigerian “stakeholders” go for medical care. His eraser was unable to hold off death.

In the particular context of Nigeria, that Adisaian argument about the eraser often appears irrefutable. It often seems that memory – an abiding awareness of events and experiences – is untenable in Nigeria. A friend of mine even once suggested that Nigerians are, on the whole, allergic to memory, hostile to the human enterprise of remembering. The price of this allergy is, of course, that (Chinua Achebe memorably reminded us), we no longer know when the rain began to beat us. That gap, I suggest, accounts for a great deal of national inertia, our incapacity to do anything to shield ourselves from the buffeting storms.

Still, I have the sneaking feeling that Nigerians are not altogether as bereft of memory as it is fashionable to suggest. Instead, it is more the case that our lives have become such a relentless cascade of absurd events that the psyche would simply come apart if it did not find a mechanism for deflecting the incessant, stormy shock. Think about the parade of horrors that’s become part and parcel of Nigerians’ everyday experience: gruesome road accidents; police shootings of innocent people, sometimes on account of disputes over N20 bribes; death by Boko Haram explosives; lecturers who demand sex or cash in exchange for good grades; students who offer sex or cash in lieu of hard work; civil servants who pocket billions in public funds entrusted in their care; National Assembly members who won’t give a straight answer about their entitlements (for the reason that these payments are both excessive and bear no relationship to output); local government officials, governors and the president who stow away hundreds of millions each month in “security votes” – and then pocket huge contract sums as well; highways daubed with a thin film of tar and declared “constructed”; neighborhoods swallowed by flood water; civil servants and private sector employees who go for months without pay; civil servants and private sector employers who go for months without putting in a decent day’s job; daily traffic jams that seem choreographed from hell; hospitals stripped of equipment; hospitals where high bills and death are the only guarantees; school buildings in such dismal shape that class conscious rodents abandon them for classless cockroaches; urban shanties surrounded by clogged, brackish gutters; visitations by armed robbers and kidnappers – and so on.

The mind is capacious, sure. Yet, the sheer challenge of processing and holding in the traumas of daily life in Nigeria is a recipe for disaster. It may well be the case, then, that Nigerians remember and remember sharply those who misshape their lives. Even so, they must feign forgetfulness and laughter in order to go from one day to the next. The question that should trouble the Adisas of Nigeria – with their pencil and eraser metaphor – is this: what happens when the people realize that laughter and (seeming) forgetting have not served them? What happens when, inevitably, there’s fire on the mountain?